Requiem: A Tale of Exile and Return- a new publication by Erel Shalit 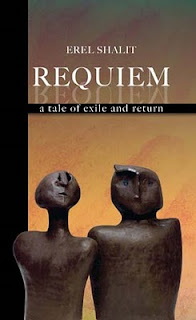 With Great Pleasure Fisher King Press is pleased to present:
Requiem: A Tale of Exile and Return by Erel Shalit

I am pleased to share with you the announcement of my newly published novella, Requiem: A Tale of Exile and Return

, in which I have fictionalized my ruminations on issues of exile and return.

The razor-sharp edge of religious beliefs and national conflict, of shadowy projections and existential anxiety, that characterize Israel and its neighbors, gives rise to a particular blend of archetypal fate and personal destiny, of doubt and conviction, despair and commitment, of collective identity and personal choice. However, I do believe that the essence of my wonderings reach beyond the shores of the eastern Mediterranean or Jewish tradition. I believe the tension between a sense of exile and return, belongingness and estrangement, are universal aspects, certainly in our post-modern world.

While Israeli reality provides the external context, the story serves, as well, as a metaphor for the exile and return of the soul, which necessarily is a journey through shadowy valleys.

Erel Shalit is a Jungian psychoanalyst in Ra’anana, Israel. He is a training and supervising analyst, and past president of the Israel Society of Analytical Psychology. He is the author of several publications, including Enemy, Cripple, Beggar: Shadows in the Hero’s Path, The Hero and His Shadow: Psychopolitical Aspects of Myth and Reality in Israel, and The Complex: Path of Transformation from Archetype to Ego.

All of Erel Shalit’s titles and many more Jungian psychological publications are available for purchase at the Fisher King Press Online Bookstore or by phoning 1-800-228-9316 in the US and Canada, or 1+831-238-7799 from abroad.

Requiem ISBN 978-1-926715-03-2 can be purchased at Amazon or directly from the Fisher King Press Online Bookstore.

The Encyclopedia of Psychology and Religion, has now been published by Springer, New York edited by David Leeming, Kathryn Madden and Stanton Marlan).

The following is an excerpt from my entry on the Sacrifice of Isaac:

Sacrifice of Isaac by Erel Shalit

The sacriﬁce of Isaac, in Hebrew the akedah, i.e., the binding of Isaac, is one of the Bible’s most dramatic stories. In its extreme brevity, the narrative is an archetypal skeleton, not ﬂeshed out by personal details or human feelings. It thus lends itself to innumerable theological explanations, philosophical readings and psychological interpretations.

God tells Abraham to go to the land of Moriah (possibly meaning the land of the Amorites, the land of worship, or the teaching-place of God) and offer his beloved son Isaac for a burnt offering. Abraham does not question his God, with whom he has sealed a covenant. He has been promised that he will ‘‘multiply exceedingly,’’ and become a father of many nations. He binds his son Isaac and lays him upon the wood on the altar he has built, but when raising his knife, the angel calls upon him not to slay his son. He has passed God’s test of devotion, and a ram is offered in place of Isaac. Abraham then calls the place Adonai-yireh, because ‘‘the Lord has been seen’’ (Genesis 22: 1–14).

For philosophers and religious commentators, the test of Abraham has provided a stage, similar to the trial of Job, for contemplating good and evil. Kierkegaard emphasized Abraham’s anguish and suffering in preserving his faith. For him, ‘‘only one who draws the knife gets Isaac’’ (Kierkegaard, 2006: 27). The willingness to fulﬁll the command (or rather, as phrased in Hebrew, the request) to sacriﬁce Isaac becomes, then, for Kierkegaard, a rekindling of faith in the good God, while for Kant it represents an act of evil to be rebelled against.

In Jewish thought, the perception of the story has commonly emphasized Abraham’s devotion to God, to the extent of sacriﬁcing the embodiment of his future. It has been considered a paradigm of the readiness to give up life in order to sanctify the divine name, but also as punishment for Abraham having sent Ishmael into the wilderness.

Some biblical scholars have read the account as a prohibition against child sacriﬁce, such as mentioned for instance in Jeremiah (7: 31; see also Exodus 22: 28–29; 2 Kings 3: 27, 16: 3, 21: 6), with the angel intervening to prevent Abraham’s act of ﬁlicide. The narrative has also served as a model for anti-Semitic blood libels accusing Jews of ritual murder of non-Jewish children.

Already some early legends told the story that Abraham in fact did slay and then burned Isaac. The lad ‘‘was reduced to ashes,’’ only to be revived by God’s ‘‘life-giving dew’’ (Spiegel, 1993: 37). Thus, Isaac served as a ‘‘symbol for the archetypal experience of death and re-birth’’ (Dreifuss, 1971: 72).

The symbolic death of Isaac has been understood as transformative, conﬁrming him in his role as chosen to carry out God’s promise to Abraham, to be the one in whom the seed shall be called (cf. Abramovitch, 1994: 123; Genesis 21: 12). This seed, says St. Augustine, while called in Isaac, is gathered together in Christ by the call of grace. The sacriﬁce of Isaac becomes the precursor of Christ; like Jesus carried His cross, Isaac himself carried the wood to the place of sacriﬁce, and like the ram was offered in place of Isaac, so Jesus would die on the cross for humankind.

The name of the sacriﬁcial child is not mentioned in the Quran. Consequently, Muslim scholars have disagreed whether it concerns Ishmael or Isaac. Since it is said that Abraham offered up his only son, scholars have argued this could only mean Ishmael, the elder of the two. The importance ascribed to the sacriﬁce is reﬂected in Eid-ul-Adha, the Feast and Festival of Sacriﬁce, celebrated immediately after the Hajj, the annual pilgrimage to Mecca.

The akedah offers a kaleidoscope of psychological facets and interpretations. Abraham, Urvater of the monotheistic religions, stands in the center, between the Father-God, who now requires of him the sacriﬁce of his repeatedly promised seed, and the late-born son, predestined to fulﬁll the covenant and conceive the earthly offspring. The offering of a child to appease the gods is a common theme in myth and legend in many traditions.

Psychological interpretations naturally tend to look at the father-son relation. One aspect of this is submission – both Abraham’s and Isaac’s – to the command of the father. It entails the recognition of God’s supremacy, interpreted on the psychological level as reﬂecting weakness in relation to authority. Yet, the archetypal scheme seems more important than personal character, since Abraham already had shown himself quite capable of challenging God, as when he argues and negotiates with God to spare the sinners with the righteous in Sodom (Genesis 18: 23–33).

Father’s Reluctance Against His Son

In a sense, the akedah is a reversal of and predecessor to the Oedipus complex. A complex would not have been born in Oedipus’s name if it were not for his father Laius, who frightened by the oracle’s prophesy of his son’s patricide and mother-incest exposed Oedipus to certain death. Only the shepherd’s compassion saved Oedipus the child from certain death by unprotected and defenceless exposure to archetypal forces. Likewise, Acrisius, fearing the prophesy that his grandson would kill him, locked hisdaughter Danae and grandson Perseus in a chest and threw them into the river to an unsure fate, though they were saved by the good ﬁsherman. (Later, Perseus saved Andromeda, who was offered by her father, the king, to appease the sea monster Cetus.) The Laius complex, the father’s fear of the son, who eventually will destroy and replace him, precedes the son’s slaying of the father.


Erel Shalit's Requiem: A Tale of Exile and Return, and Enemy, Cripple, Beggar: Shadows in the Hero's Path and his previously published book The Complex: Path of Transformation from Archetype to Ego can be purchased at www.fisherkingpress.com or by phoning Fisher King Press directly at 1-831-238-7799.

Posted by Fisher King Press at Monday, January 18, 2010 No comments:

Symbols in the Sand

Archetypal Images of the Life Cycle

Self, Meaning and Transiency

October
Sofia
To be announced

Erel Shalit's novella Requiem: A Tale of Exile and Return, as well as Enemy, Cripple, Beggar: Shadows in the Hero's Path and his previously published books can be purchased at www.fisherkingpress.com or by phoning Fisher King Press directly at 1-831-238-7799

Posted by Erel Shalit at Saturday, January 09, 2010 No comments: