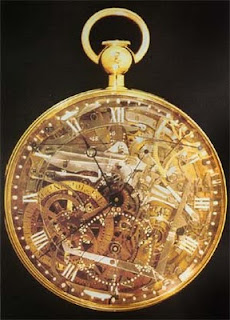 Haretz newspaper reports (March 4, 2010) that the widow of one of Israel's most famous thieves was recently convicted in the United States of possessing stolen property and sentenced to 300 hours of community service, U.S. law enforcement officials said. The conviction of Nili Shomrat, 64, followed a three-year investigation and is the latest chapter in a story that has been unfolding for almost 30 years. It began with a mysterious break-in at Jerusalem's Museum for Islamic Art on April 15, 1983, when a lone thief stole some 200 valuable watches from the museum's collection. The crown jewel of the haul was a watch originally made for Marie Antoinette by the 18th-century watchmaker Breguet.

Read more in Requiem: A Tale of Exile and Return

"…, he came to think of the exquisite Marie-Antoinette watch. It had taken the supreme watchmaker Abraham Louis Breguet forty-four years to complete this masterpiece of all times. The Queen did not live to see this timeless tabernacle of time, ready to be presented to the world only in 1827, even after Breguet himself had ascended from this world. As Sir David Lionel Salomons, the last owner of the watch had claimed, to carry a Breguet watch is to have the brains of a genius in your pocket. More than a hundred and fifty years later, the Queen of Clocks disappeared from the Museum of Islamic Art in Jerusalem, where the founder, the daughter of Sir David, had opened her father’s collection to the public. Marie Antoinette would reappear twenty-five years later, as mysteriously as she disappeared, having been watched and compulsively cared for by the master thief, until his death. During a quarter of a century, the glass showcase stood orphaned in the cellar of the museum. Shimeoni often wondered what happened to time in its absence. Was this only a simulacrum of time and temperature, a 823 piece replica in gold and crystal of the sun and the moon and a perpetual calendar – or was it a manifestation of Chronos, whereby Time itself moved the hands of every second? Would time continue only as long as it could manifest itself in this world? Would Time end if its worldly manifestations would disappear? Following Baudrillard, Shimeoni, as well, thought the post-modern image had become its own simulacrum, a representation of itself, no longer in need of something “real” that it would represent. …"
Erel Shalit's Requiem: A Tale of Exile and Return and his previously published books can be purchased at www.fisherkingpress.com or by phoning Fisher King Press directly at 1-831-238-7799
Posted by Erel Shalit at Thursday, March 04, 2010