Where does fantasy end, where does reality take over? 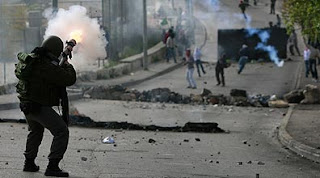 As reported in Haaretz newspaper,

"Dozens of Palestinians clashed with Israeli police in East Jerusalem on Tuesday [March 16, 2010] on a 'day of rage' Hamas declared to protest Israel's consecration of an ancient synagogue in the city one day earlier. Palestinians hurled stones at police and burned tires and trash bins in several areas of East Jerusalem…  dozens of youths hurled stones at Border Police officers in the Shoafat refugee camp and in the neighborhoods of Isawiyah and Wadi Joz. Jerusalem police spokesman Shmuel Ben-Ruby says police fired stun grenades to disperse dozens of protesters at one site. He said village elders helped end protests at another site. Police also arrested an Israeli rightist who sought to enter the Temple Mount compound and was refused by security forces. A police spokesman said some 3,000 officers were put on high alert … after Hamas announced, 'We call on the Palestinian people to regard Tuesday as a day of rage against the occupation's [Israel's] procedures in Jerusalem against al-Aqsa mosque.' Galilee police set up roadblocks around Safed and Acre on Tuesday to prevent Israeli Arabs from northern towns and villages from traveling to Jerusalem to take part in the protests. At 6 P.M. [Monday], scores of youths hurled stones at Border Police troops from the Palestinian side of the Qalandiya crossing, north of Jerusalem. The youths were dispersed, and the crossing closed. Tensions Monday were fanned by rumors in the Palestinian street that Jews intended to march on the Temple Mount after the ceremony."


Those of you who have read my Requiem: A Tale of Exile and Return

"… Now, undercurrents streamed into rivers. The Islamic movement called upon all adult Arab men to join the big march to Jerusalem and gather on the Temple Mount, at the compound in front of the Al Aqsa Mosque. The call spread across the country. Young and old, from the Galilee in the north, the Negev in the south, and from the Triangle of Arab towns in the center of the country, turned up in unprecedented numbers. The call spread across the West Bank as well, and people just started marching.

The security services had presented the Ministries of Defense and of Interior Security with reports, in anticipation of unrest on Land Day and the following weeks. The government was not taken by surprise, but seemed paralyzed. The police hastily set up roadblocks across the country, which the masses just broke through. The border police had been instructed that under no circumstance may live ammunition be used. The memory of the killed demonstrators in October 2000, at the beginning of the second Intifada, was on everybody’s mind, and no one wanted events to be repeated. In quite a few places the marching crowds managed to take policemen, mostly policewomen, hostages. Most were released the following day in exchange for demonstrators that had been arrested, except for two hostages. A policeman and a young woman from a human rights group, who, by her presence at a roadblock wanted to ensure that the police refrain from violence against the marchers, had been brought to the Temple Mount area. There they were cruelly flung down to the plaza in front of the Western Wall, together with a rain of stones. Praying Jews, mostly French tourists, were quickly evacuated, and except for those two, people suffered only minor injuries.

Palestinians from the West Bank managed to break through the security fence. Widespread laughter swept across the long chain of people holding arms as they, within a matter of minutes, tore down “the wall,” the security fence, making mockery of our typical Israeli patchwork, professor Shimeoni recalled in anger and self-ridicule."

As Carl Sagan has said, “The price we pay for anticipation of the future is anxiety about it. Foretelling disaster is probably not much fun; … [but] The benefit of foreseeing catastrophe is the ability to take steps to avoid it.”


And, as one reviewer has written, "Elegantly and thoughtfully mourning today's saga of Israeli disillusion without hope, bitter alienation, and collapse of Zionist ideals, Shimeoni indicts the present movement out of the country for profit and the concomitant surrender of 'soul.' But relying on the consistency of past Jewish history and the 'triumphalism of hope' the reader reluctantly puts the book down - and smiles! "