From Memorial Day to the Day of Independence 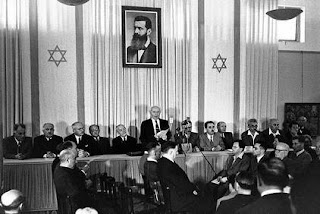 Monday, April 19, corresponds to 5th day of the month of Iyar in the Hebrew calendar, Israel's Independence Day.
Characteristic of the swings between pain, loss and despair, on the one hand, and relief, euphoria and sometimes arrogance, on the other, the transition from a day of mourning to a day of celebration is harsh and immediate, with no buffer in between.

The following is a brief excerpt from my novella Requiem: A Tale of Exile and Return:

The country had always been too hard for almost everyone. And the price of keeping it alive was perhaps too high, not only in the past, but in the future as well. For the last several years he had made it a habit, as the sirens rang out on Remembrance Day for the dead, to recall not only the fallen and the killed, friends and relatives, but to think of those whose time is yet to come. The words of the poet Yehuda Amichai were always on his mind, “The bereaved father has grown very thin; he has lost the weight of his son.” (pp. 71-2)


The following is a brief excerpt from The Hero and His Shadow: Psychopolitical Aspects of Myth and Reality in Israel:

Since redemption grows out of death and destruction, Zionist redemption has always carried a dark shadow of death and madness, despair and alienation. The second a’liyah, the consequential wave of immigration between 1904 and 1914, suffered massive remigration and numerous suicides. While the early plays and dramas about settling the Land depicted the pioneer in accordance with the collective idea as a giant, “sunburnt as the earth with which he identified,” the so called theater of doubt had him appear as a weakling, “pale and out of place in nature” (Ofrat 1979, p. 46). The pioneer who redeemed the land and felt at one with it, who built the new national home, was portrayed as a collective being, representing the collective’s ego‑ideal. However, in the more pessimistic, skeptical plays of the period, “he dissociates himself from his people” (ibid., p. 46). In these dramas we find the loneliness and estrangement of the individual who felt he or she did not belong, or who was unable to fit into the collective ego‑ideal. Underneath the hope for the future, there was despair of the day, as expressed, for example, by the characters in Orlov’s Alla Karim, written in 1912:
I ask, is there a reason why we are wallowing in the filth here in blessed Palestine, suffering hunger and sinking from day to day?... We are lost, all of us, lost ... with no path ... where are we going?
Madness lurks in the background of redemption, as told by the narrator in a story by Yehuda Ya’ari from 1934:
In their souls there was a striving for redemption, redemption of the entire people and redemption of the individual human being. And, I’ll tell you a secret: this striving was greater than they could sustain or even comprehend. Too great a soul’s desire ... can drive a person out of his mind.
The individual’s identification with the archetypal idea of redemption threatens him with madness. Behind the notion of home, we find displacement; behind redemption linger death and madness; and behind the dreams we are ridden by the mares of the night. The dialectic was and is inescapable. However, if the collective dream accounts for its nightmarish aspects, not letting the outsider and the outcast be sole carriers of the entire burden, society stands a better chance not to fall victim to its own split-off shadow, or misled by false conceptions (such as the fallacious self-perception leading up to the Yom Kippur War). (pp. 35-36)
All of Erel Shalit's publications can be purchased at http://www.fisherkingpress.com/ or by phoning Fisher King Press directly at 1-831-238-7799, Toll free in Canada & the US 1-800-228-9316
Posted by Erel Shalit at Monday, April 19, 2010