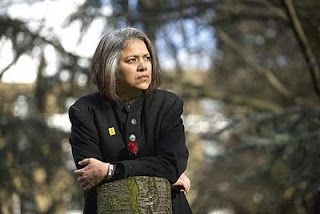 Gita Sahgal, an Indian-born author and journalist, is a leading voice against oppression of women, particularly by religious fundamentalists.
Until fired, April 2010, she was head of the Amnesty International's Gender Unit.
Why did Amnesty International fire Gita Sahgal?
Gita Sahgal criticized Amnesty for its association with Moazzam Begg, director of Cageprisoners, a well-known supporter of the Taliban.

Begg has said Sahgal's claims of his jihad connections and support for terrorism were "ridiculous," since he doesn't consider anyone a terrorist who has not been convicted of terrorism – i.e., if you commit a crime but escape conviction, you are innocent, goes this immoral, unethical and pervert reasoning.

Salman Rushdie, among others, has spoken up in support of Gita Saghal, claiming Amnesty – and Begg – "deserve our contempt."
Denis MacShane, a former Labour minister, called it "Kafkaesque" that Amnesty would threaten the career of Sahgal for her having exposed "an ideology that denies human rights."
Amnesty has stated that she was not suspended for "raising these issues internally." That is, her "crime" was going public (to let herself be quoted in The Sunday Times) about it – disclosing to the public the organization's hypocrisy.
Is not the mission of Amnesty to go public about "protecting human rights worldwide," as they claim?
In the post-modern condition, we fortunately do not adhere to the one and absolute truth of fundamentalism. Also, abandoning discrimination and reaching out respectfully to the Other, is one of the assets of multiple subjectivism.
However, there is a great danger that post-modern, multiple subjectivism gives undifferentiated, equal value to anything – to any act and any belief system – except for those who might criticize this lack of moral differentiation. Indian journalist Antara Dev Sen writes about Gita Saghal's courageous stand "given the dread of political correctness that cripples our thought" – a political correctness which may replace moral judgment and intellectual integrity, or, as written in the Wall Street Journal, "it's a pity that a group that was born to give voice to the victims of oppression should now devote itself to sanitizing the oppressors."

Read more about transiency and psychological aspects of the post-modern condition in Erel Shalit: 'Destruction of the Image and the Worship of Transiency.' Jung Journal: Culture & Psyche, Feb. 2010.
All of Erel Shalit's publications can be purchased at http://www.fisherkingpress.com/ or by phoning Fisher King Press directly at 1-831-238-7799, Toll free in Canada & the US 1-800-228-9316
Posted by Erel Shalit at Friday, April 30, 2010