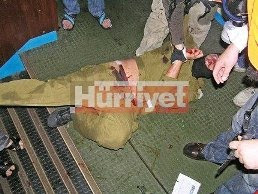 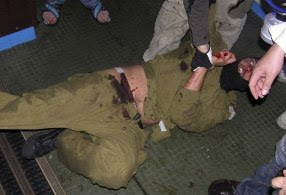 The young men of the Israeli Navy commando that boarded the Mavi Marmara, should be commended for their exemplary conduct. In a complex and unexpectedly violent situation, they showed admirable restraint. They were attacked by a mob of hooligans with knives, batons and gunfire, some whom were Al-Qaida linked mercenaries - not the peace activists they had anticipated and prepared for.

Is Israel entitled to prevent ships from entering Gaza?

The Hamas regime, having taken power by force, calls for the destruction of Israel, does whatever it can, including the firing of thousands of rockets, kidnappings and bombings, to achieve this goal. Yet, over the last 18 months more than a million tons of humanitarian supplies entered Gaza from Israel – nearly a ton per person.

The decision to divert the convoy at sea, rather than await its arrival at Gaza coast, with the prepared manifestations and provocations, seems to be legally justified and tactically reasonable.

Is the blockade itself an immoral act of collective punishment, as for instance author Amos Oz says?

Considering the fact that the Hamas regime is more intent on destroying Israel than caring for the welfare of its own population (including the killing of 600 Palestinians, and wounding 2000 of their opponents by shooting them in the leg or knee), Israel’s insisting on examining the shiploads for ammunition and weaponry flowing into the Hamas terror-state may well be a legitimate act of self-defense. There is a similar sea blockade of Lebanon, upheld by other countries. However, that blockade is not put to a test, since the land road from Iran to Hezbollah is open via Syria.

While there are moral and political issues to contemplate as regards Israel’s and Egypt’s blockade, the two countries may be justified in preventing attacks from Gaza.

If all is so right, how come that it turns out so wrong?

How come that maintaining a blockade against an illegitimate, extremist terror regime, becomes a critical leap in the delegitimization of Israel, rather than delegitimizing those, whose intent it is to destroy the Jewish State?

Israel has not grasped well-enough the principles of post-modern warfare, in contrast to its enemies. Thus, an unholy alliance of evil and innocence stretches from Iran, Hamas and Hezbollah, to NGO’s and peace-activists, on to the UN and many Western regimes.

In the post-modern era, the emphasis is not on truth and value, but narrative and image. Thus, the open-minded and well-meaning become collaborators to fundamentalists and reactionaries in the creation of a narrative of innocence and victimization, vs. Israeli militarism and oppression.

Israel should not follow the lead of its enemies in constructing false images, such as the false accusations against Israel about the so-called Jenin massacre and an ever-increasing list of lies, but present an honest and consistent narrative, preferably the desire for peace by two states for two peoples. If the narrative is sincere, based on inner conviction, then truth will stand on firmer legs than slander and lies.

Furthermore, the ratio between physical and virtual warfare has changed. While combat at the physical battlefield once constituted the essence, the ease and access of images nowadays reverses the ratio. The unscrupulous use made by the Free Gaza Movement of a compote of terror-linked organizations and well-meaning solidarity movements, creates a façade of Palestinian innocence and victimization, and condemnation and delegitimization of Israel.

Besides an honest and consistent narrative, Israel needs to utilize the means of the post-modern era. Thus, for example, as regards the Marmara, Israel should not be reluctantly drawn into an international investigation, but initiate and demand the affair be interrogated. There is place to look into Israel’s blockade – morally, politically and militarily; the legal and military conduct when taking command of the ship; the extent of humanitarian aid that reaches or does not reach Gaza, and who is responsible – this may be an arena for Israel to present its case.

But no less, there is a need to look into the legal aspects of breaking a possibly legitimate blockade; what is the civilian/military status of those who violently reject and oppose enforcement of such a blockade; what is truly the terror-affiliation of some of the organizers; what is the involvement of the Turkish government with the IHH and the flotilla (if so, and if the blockade is legal, does that possibly indicate even an act of warfare by Turkey against Israel?).

Please take a look at the two pictures above – they explain how the transition from Jihad militant to peace activist takes place.

The Turkish newspaper Hurriyet has released photos from the Marmara ship, showing beaten Israelis commando soldiers (see photo on top). In the Turkish narrative, humiliation of Israelis is important, and therefore the photos can be shown authentically, without any need of hiding or distorting. If the Israelis are weak, they can be overcome and cleansed from the country, which is the aim of both the PLO and the Hamas, as expressed in their respective charters.

However, in a Western narrative, peace and solidarity are vital. Thus, now look at the picture below, as released by Reuters. Notice how the knife, low right, in the hand of one of the men, has been cropped. The photo may, in fact, be interpreted as if the 'peace activists' actually are lending a helping hand to the poor soldier.

The subtle change of the picture is hardly noticeable, yet has dramatic accumulated consequences. Over the last decade, this has been repeated over and over again, until even the well-meaning have become convinced of Israel's evil.

History does repeat itself, even if the means are post-modern. Without adequate understanding of the post-modern condition, demonization and delegitimization may eventually ‘succeed,’ whereby Israel will be dismantled and replaced by an Islamic State of Palestine. The West will most likely, then, kindly request it to commemorate the people and the culture that preceded it.

To change history’s course of disaster, Israel needs to find ways to terminate occupation, to deal with Palestinian double-talk of peace, on the one hand, and ongoing incitement, on the other, and to be more creative in facilitating the awakening from the odd, delusional partnership between Western open-mindedness and Islamic fundamentalism.

Dr. Erel Shalit is a psychoanalyst and author, and past President of the Israel Society of Analytical Psychology. Erel Shalit has served as officer in the IDF Medical Corps, has been on the council of Meretz, and is a member of The Council for Peace and Security. His latest book, the novella Requiem: A Tale of Exile and Return, is a fictitious account of a scenario played out in the mind of many Israelis, pertaining to existential reflections and apocalyptic fears, but then, as well, the hope and commitment that arise from the abyss of trepidation.