Hamas filmmakers present “The Liberation of Tel Aviv and Palestine” 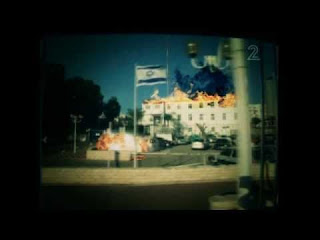 A new video clip, gaining popularity in the West Bank and Gaza, depicts the take-over of Tel Aviv, renamed Tel-Arabiya, and the conquest of Israel. The High Court of Justice and the Bank of Israel buildings in Jerusalem are burned down.
After Israel is successfully attacked and "liberated," Palestinians are shown walking along the Tel Aviv promenade and on its streets. The height of the film is when the channel 2 TV studio has been taken over, its Israeli broadcaster replaced by a Palestinian, ready to declare the “liberation of Tel Aviv and Palestine.”

I doubt that the Palestinian filmmakers read my recent novella Requiem: A Tale of Exile and Return, which includes captions like,

Meanwhile, tens of thousands of demonstrators arrived in Jerusalem and Tel Aviv. It turned out that many policemen had simply remained at home, exhausted from the events of the last few weeks. Tel Aviv’s central Rabin Square and the surrounding streets filled up with demonstrators and banners, “Palestine for the Palestinians,” “One Palestine,” “Free Palestine.” Young boys climbed every pole and every pillar, raising the Palestinian flag. Soon the crowd started chanting “Tel Aviv, Tel Arab, Tel Aviv, Hill of Falastin.” (p. 82)

A recent article by prominent Professor Shlomo Avineri depicts a similar, fictitious scenario, in which the Jewish character of the country is progressively erased. The account, which, as Avineri says, will not happen, begins and ends as follows,

A radical Jewish leftist who supported the steps that led to the legislation turned to a head of an Arab organization and asked: "We did what you wanted, and you still aren't satisfied. What should we call the country so you'll really feel equal?" With a broad smile the head of the Arab association replied: "What's the problem? The real name was and always will be: Falastin."
(Shlomo Avineri: Biladi, Biladi – What's in a Name? (http://www.haaretz.com/print-edition/opinion/biladi-biladi-what-s-in-a-name-1.312848)

The Hamas film, Avineri’s article and my novella all deal with the threat to Israel’s existence. The UN partition plan in 1947 divided the land into two states, Arab Palestine and Jewish Israel. Tragically, the Palestinians still reject the recognition of Israel as a Jewish state. Likewise, the idea of two states for two peoples is impaired by the settlements beyond the security fence, comprising a majority of settlements but a minority of settlers.

A major purpose of mine has been to imagine a worse case scenario, which will not happen, but which can easily be imagined, and in the lack of constructive imagination and determined policies, creates fear and anxiety, on the one hand, fantasies and delusions, on the other. Therefore, my novella ends optimistically (for those who care about Israel's existence), since its survival relies on human traits and capabilities beyond either the fear or the wish for its extinction.


Review of Requiem: A Tale of Exile and Return, by Erel Shalit (posted on Amazon)

Slender, Succinct, Superb, February 3, 2010
By Edith Sobel (Fort Lee, New Jersey)
This slim but incisive novella is a philosophical but completely comprehensible take on contemporary Israel. From a "litany of lamentations" drawn from the current generation which appears to be the antithesis of their idealistic founding fathers, the thoughtful narrator Eli Shimeoni (about to give a lecture in New York) recounts his overriding despair - but eventually concludes with hope.
Elegantly and thoughtfully mourning today's saga of Israeli disillusion without hope, bitter alienation, and collapse of Zionist ideals, Shimeoni indicts the present movement out of the country for profit and the concomitant surrender of "soul."
But relying on the consistency of past Jewish history and the "triumphalism of hope" the reader reluctantly puts the book down - and smiles!