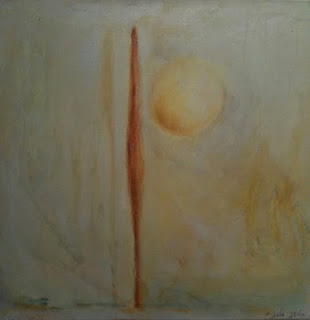 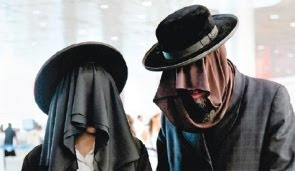 Rabbi Nachman of Bratslav died October 16, during Sukkot 1810, thirty-eight years old. On the eve of his death 200 years ago, tens of thousands of Hassidim, and particularly his devote followers, visit his grave in Uman, Ukraine. In order to protect themselves from "forbidden sights" some of them cover their eyes with scarves.
I compliment them on this development, which may signify a progressive turn as regards women, assuming that it is the women who constitute the primary sight of danger and temptation for these men, young and old.
Does this new fashion indicate that not the women need to be pushed away, segregated, their faces covered, but the time has now arrived for the men to carry their own folly?
Yet, I do hope that some of the internal sights of sin and misdemeanor will penetrate into consciousness from within their soul, to allow for appropriate sinfulness and madness.
Rabbi Nachman told the story of The Tainted Grain:
A king once told his prime minister, who was also his good friend: "I see in the stars that everyone who eats from this year's grain harvest is going to go mad. What do you think we should do?"
The prime minister suggested they should put aside a stock of good grain so they would not have to eat from the tainted grain.
"But it will be impossible to set aside enough good grain for everyone," the king objected. "And if we put away a stock for just the two of us, we will be the only ones who will be sane. Everyone else will be mad, and they will look at us and think that we are the mad ones.
"No. We too will have to eat from this year's grain. But we will both put a sign on our heads. I will look at your forehead, and you will look at mine. And when we see the sign, at least we will remember that we are mad."