"Enemy, Cripple and Beggar is an intensely moving book that speaks deeply to the psyche." 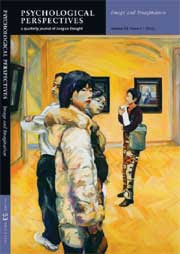 is devoted to exploring that critical period during individuation in which the individual must heroically confront his or her inner darkness, the shadow. The shadow is the dark part of the psyche that we disown in childhood as the ego develops. Integrating the shadow leads to renewal and rebirth. It is a daunting task undertaken by the heroic ego. As Erel Shalit states: "The hero is an archetypal image of that aspect of the ego that searches for renewal [125]. …The task of the hero is to wrestle himself out of collective consciousness, the ingrained norms and prevailing worldview, our neurotic defenses, those rites of the soul and rituals of the spirit that have fallen into ruins of obsessive litany and compulsive decree. The hero revolts against an ego that has stiffened in the grip of habits and conventions, an ego that has become empty behind the emperor's new clothes, whether within the personal psyche or that of society. The hero must go forth into the dark and venture into the unknown to redeem a barren soul, a forgotten myth or a lost feeling, and then return and bring it back into consciousness. And in his struggle with a corrupt collective consciousness, the hero must be equipped with integrity" (pp. 137-138).
Erel Shalit has written Enemy, Cripple and Beggar in an inspiring prose-like style. Surprisingly, he examines the shadow from both the perspective of the inner process and from the perspective of the outer political process. As an Israeli Jungian psychiatrist, Erel Shalit examines the shadow of the Israeli-Palestinian conflict, and the result is an amazing view of shadow integration both as an inner psychological and as an outer societal process.
Shalit writes: "Destruction of morality and humanity does not turn the rebel of the mind or the militant in the world into a hero. Psychologically, there is no rejuvenating heroism in projecting the shadow onto the Other, as does the fanatic, the fundamentalist and the terrorist" (p. 25). Projecting the shadow onto others is the natural response early in life. But later in life, projecting the shadow is the opposite of heroic. Re-owning projected shadow and integrating its contents is a lifelong task of individuation and a moral necessity.
Shalit points out that the hero needs the shadow: "The shadow is the blood of the hero's soul" (p. 89). To be able to go forth into the dangerous battle with the inner darkness, the hero must develop important attributes. For starters, the hero needs a healthy dose of narcissism to be able to trust the ego's capabilities. The hero needs a connection to the Self, or a developing ego-Self axis; this means that the hero must have an ability to communicate with the inner divine, the inner God-image. Or, as Shalit states, "The hero has one foot in divinity, one in the world of mortals" (p. 33). The hero also needs both solar and lunar attributes-the solar ability to cut through and break free from the devouring mother archetype, and the lunar ability to reflect and consciously turn toward the unconscious.
Throughout Enemy, Cripple and Beggar

Shalit illustrates the personal and archetypal dimensions of the shadow with case examples, myths, and biblical stories. He illustrates the archetypal shadow with the biblical story of the Amaleks, who were descendents of Esau, the rejected brother of Jacob. Esau was denied his birthright by Jacob, and the rejection and denial reverberated across family generations to yield the Amaleks. As the Israelites wandered in the desert with Moses, the Amaleks killed and tormented them with deceit, brutal cruelty, and cowardice. Shalit states, "The more severely something is repressed or denied, the harsher it will strike back from behind" (p. 111). The story of the Amaleks illustrates that the denied and repressed reappears with exponentially increased hostility; that which is denied grows and becomes unbearable to suffer. Denial of evil is worse than the experience of evil. Suffering must be witnessed to be transformed, as Shalit points out.
Thus to help our clients heal, Jungian analysts must guide them to an experience of the inner darkness, which can feel wounding-Shalit talks about the need to be a wounding healer. Integrating the shadow yields the treasure that is hard to find: a new connection to the anima/animus, a new connection to the inner soul and spirit.
Shalit discusses the shadow as cripple; complexes that are not integrated often live in the shadow and cripple us. Shalit uses the myth of Hephaestus to illustrate this point. Hephaestus is the son of Hera, and possibly Zeus. When Hera saw that her newborn son, Hephaestus, was lame, she threw him into the sea. Hephaestus was saved and raised by Thetis, who was the nymph of creation. Hephaestus worked as a metal smith and in deep underground fires, he made Pandora's box and Achilles' armor. Shalit points out that Hephaestus is the only Greek god that worked. It is the lame and wounded parts of the soul, symbolized by Hephaestus, that make us work. The process of working deep in the underground fires with the wounded parts of the soul is transformative and creative.

I want to conclude with a lovely quote at the end of Enemy, Cripple and Beggar, a wonderful book to read

and reread: "On the way home, toward the essence of our being and the meaning of our path, we need to be equipped with the sword and with bravery, with a mirror and reflection, embrace and compassion, with strength and with weakness and with the light of appearance and a guiding lamp" (p. 224).

Psychological Perspectives is a quarterly journal of Jungian thought published since 1970 by the C. G. Jung Institute of Los Angeles.
Posted by Erel Shalit at Saturday, October 23, 2010