The Soul Violin is a journey through arts and Judaism, using the image of the violin: the violin as an instrument that expresses the fine movements of the soul, and also the soul as so tender and light as a delicate violin.

The performance was staged twice on the European Day of Jewish Culture, and is scheduled again for January 2011, in a big tent in the Sofia city park. Two spaces were created: one serving as the space of the here and now, while in the other, one can travel through the imagination of Jewish authors. 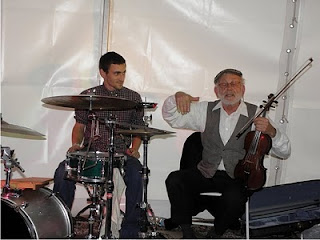 In the one space, the great Bulgarian actor Itzhak Finzi played the violin and shared memories, accompanied by a young drummer. The combination of a violin and a drum set created the feeling of a music that soon will fade out. 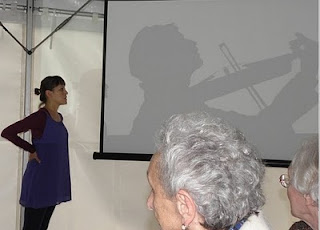 When looking to the other space, with the help of two young actors, one could travel through the imagination of Jewish authors. Starting with a Ladino fairy tale, then through the deeply involving combination of two Israeli texts – an excerpt from Erel Shalit’s “The Hero and his Shadow,” and Haviva Pedaya’s poem “One who speaks to the absent,” going further in the Chagall-esque movement improvisation of no words, ending with the Ashkenazi story “The haunted violin.” These were all accompanied by the projection of pictures from the Sarajevo Haggada, German miniatures of Jews and Jewish places from the Middle Ages, and paintings by Mark Chagall and other contemporary painters.

The performance of Soul Violin was conceived and created by young Bulgarian poet, theater maker and cultural activist Ida Daniel. She has staged three plays: “Everyman” by anonymous author, “What happened after Nora left her husband or the pillars of society” by Elfride Jelinek, and “Dagmar the Dead or the Little Matchgirl” by the young Bulgarian author Svetozar Georgiev.