Between Slavery and Freedom 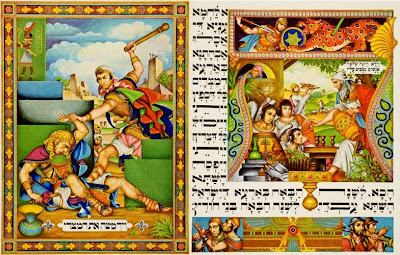 The images are by the incredible Arthur Szyk

The Jewish spring holiday of Pesach, or Passover, begins on the 15th day of the month of Nisan, the first month in the Hebrew calendar’s festival year, on the night of the full moon after the vernal equinox. This year, the eve of Pesach is celebrated on April 18.

The essence of Pesach is the release from the bonds of slavery, and the transition into freedom. During the last few months, we have witnessed how the young in several Arab countries across the Middle East have raised to their feet, paying a heavy toll in imprisonment, torture and with their lives, in a courageous yearn for freedom from the tyranny of dictators.

On the individual level, each one of us has to figure out what his or her personal sense of freedom entails, and which internal bonds and behaviors, prejudices and inadequacies enslave us.

I believe the road to freedom in the Arab world is a long and winding one. It seems unlikely the fires will stop burning any time soon, and the outcome seems unpredictable, and different in different places. Will the freedom seeking forces gain the upper hand, or will the people’s will be hijacked by tyrants, armies and fundamentalists?

Muammar el-Quadaffi wrote The Green Book: The Solution to the Problem of Democracy, in which he claims that “Women, like men, are human beings,” reaffirming this “incontestable truth.” This is quite an achievement for someone who otherwise, in his rather successful book, rejects democracy and free press.

I wonder, how come that the London School of Economics so easily accepted to sell its integrity for half a million dollars from Quadaffi (is that what enabled his son Seif al-Islam to come away with a plagiarized or ghost-written doctoral dissertation at LSE)?

And I would like to ask the UN Human Rights Council, and its member states, to look in the mirror; as late as January this year, it produced a draft report of praise to the Libyan leader and his promotion of human rights (some of the countries, under similarly enlightened leadership, that showered the Libyan leader with their praise, were Syria, North Korea and Iran).

In contrast, half of the council’s resolutions over the years have been condemnations of Israel.

The United Nations Human Rights Council’s Goldstone report was a patchwork of copy and paste of distorted information. Mary Robinson, hardly a close friend of Israel’s, refused the mission that Richard Goldstone shamefully accepted, claiming the resolution adopted by the Council was one-sided and guided by politics rather than human rights. While Goldstone has retracted the report, he still blames Israel for not having cooperated. Well, if Robinson was reluctant to cooperate, perhaps Israel was right, since the mandate was, one-sidedly, to prove Israel’s guilt, making the so called fact-finding mission into a scam from the very outset.

I believe that honesty and self-reflection are aspects of freedom, while hypocrisy and trickery are part of one’s slavery. There seems to be a large grey field between democracy and hypocrisy.

As regards us here in Israel, the prolonged occupation of Palestinian territories binds us into slavery. While there are many aspects and, for instance, security concerns, there is an urgent need to find creative solutions of termination of occupation of Palestinian land, as well as the stamina to reign in the violence and criminal behavior by certain settler groups.

Freedom, democracy and independence are threatened by occupation. Rabin, Peres, Barak and Olmert knew it, offering the Palestinians far-reaching peace-agreements, and Sharon understood it, withdrawing from Gaza, evacuating all Israeli settlers there.

The Palestinians need, as well, to understand that their freedom is achieved not merely by statehood. As long as they aim at the destruction of Israel, as comes through for instance in their media and statements in Arabic, they will remain slaves to distorted values.

The idea, as expressed in their charter, that freedom will prevail when the Jews have left the Eastern Mediterranean, otherwise called ethnic cleansing, holds them prisoners to their own self-destruction.

I wish all a Happy Passover, Chag Sameach, a celebration of freedom, 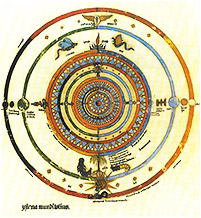 All the World’s a Stage, and a Stage of Life

Fisher King Press to publish
The Cycle of Life
by Erel Shalit
“The art of life is the most distinguished and rarest of all the arts.”
- C.G. Jung, CW 8, par. 789.
In the first half of life, the task of the young traveler is to depart from home, to step out into the world in search for his or her adventure, to find his or her own individual path. However, in the second half, we find ourselves on what often amounts to a very long journey in search of Home. In many a tale, the hero, for instance Gilgamesh, sets off on his road to find life’s elixir, while other stories, such as the Odyssey, revolve around the hero’s long and arduous journey home.

This archetypal journey of life is constantly repeated along the never-ending process of individuation. We find ourselves returning to this venture repeatedly, every night, as we set out on our nightly voyage into the landscape of our unconscious. Many dreams begin by being on the way, for instance, “I am on my way to …,” I am driving on a road that leads into the desert …,” I am walking through one room after the other in a long corridor-like building …,” “I am walking towards my office, but it looks different than in reality,” “I walk on the pavement and on the opposite side of the street someone seems to follow me …,” “I go down into an underground parking…,” “I am in my car, but someone I don’t know is driving,” or, “I have to go to the place from where I came ...”

Prominently, we are familiar with the journey of Dante, who at the very beginning of his Divine Comedy finds himself “Midway along the journey of our life.”


A partial list of topics explored in The Cycle of Life include:

I. The Journey
Stages and Seasons
Jung’s Stages of Life
All the World’s a Stage, and a Stage of Life
Being on the Way—A Way of Being
Hermes and the Journey: Being on the Way
Backward and Forward
The Crossroads
+ more
II. The Child
The Child in the Mirror
Psychotherapy and Childhood
The Divine Child
From Divine to Human
Eros, Psyche and Pleasure
+ more
III. The Puer and the Puella
Between Shame and Fear
Wine, Spirit and Fire
Prometheus—the Thoughtful Thief
+ more
IV. The Adult
King on Earth
Boundaries of Reality
Celestial Jerusalem—Terrestrial Jerusalem
The King who Refuses to Die
The Dried-up Earth
The Limping Ego
The Empty Shell
+ more
V. i. The Senex
V. ii. Homage to Sophocles
V. iii. The Last Chapter: Self and Meaning
Ancestral Roots
An Oak and an Acorn
We Are All Beggars, Are We Not?
+ more

Posted by Fisher King Press at Saturday, April 02, 2011 No comments: