What will happen on Nakba-day? 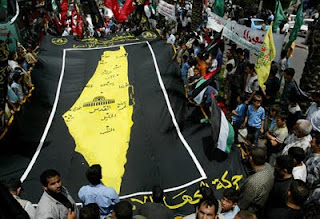 As reported in the media, IDF Chief of Staff Benny Gantz visited the Central Command, inspecting the preparations being made for possible riots on “Nakba-day”, May 15, when the Palestinians commemorate the Nakba (“catastrophe”), of the partition of the land and the founding of Israel.

As reported for instance on Ynet, “The situation in the West Bank may escalate to uncontrolled violence as result of, for instance, marches towards that border that will be aired on TV and inflame emotions; mass demonstrations in Egypt under the banner of the “Third Intifada committee”; mass marches in Gaza; violence among Arab-Israelis; and a flare-up in the Middle East’s most problematic theater: Friday prayers at Temple Mount.”

Furthermore, “Israel’s political leadership instructed the IDF not to take risks and assume major precautions. Indeed, the army already reinforced its troops in the West Bank and prepared reserve forces as well.”

The Chief of Staff said he hopes the Nakba Day events will be held non-violently, but that the army must be prepared for every possible circumstance.

According to rumors, General Gantz had secretly summoned Professor Eliezer (Eli) Shimeoni, to receive a private summary of possible scenarios. So characteristic of Israeli sloppiness, the door had been left open, and one of the soldiers on guard recorded the parts of the conversation on his iPhone:

ES: “Honestly, no idea…” (unclear, probably biting on an apple).

He started to read, “…The Islamic movement called upon all adult Arab men to join the big march to Jerusalem and gather on the Temple Mount, at the compound in front of the Al Aqsa Mosque. The call spread across the country. Young and old, from the Galilee in the north, the Negev in the south, and from the Triangle of Arab towns in the center of the country, turned up in unprecedented numbers. The call spread across the West Bank as well, and people just started marching...” (p. 73)

“Palestinians from the West Bank managed to break through the security fence. Widespread laughter swept across the long chain of people holding arms as they, within a matter of minutes, tore down “the wall,” the security fence, making mockery of our typical Israeli patchwork…” (p. 74)

Do I need to quote more from Requiem: A Tale of Exile and Return, or do you understand?" Gantz asked impatiently.

Shimeoni stopped in the middle of a bite on the apple, “I am surprised at you,” was all he could say before he started coughing.

“That is a novel, has nothing to do with reality, it’s pure fiction. I did give the author permission to quote me, but I only told stories.”

BG: “This is not fiction, this is reality. This is post-modern reality,” said the intellectual Chief of Staff. “This is not reality before you make a film of what has taken place, it is imagination creating reality.”

BG: “You misunderstand me. I am not going to censor imagination. I want to learn from it. I want to know what the possibilities are. We must learn not only from past mistakes, we need to draw conclusions from the future before it happens. Is that not what you write about, when you write about those manuscripts of Kafka and the theft of the Queen’s Clock from the Museum of Islamic Art?”
ES: “I didn’t write the book.”

BG: “We know who the true author of the events is.”
ES: “I don’t.”
BG: “You’ll find out if you read the book till the end. It only takes an hour or two to read, and you know it doesn’t end the way you thought.”

“Close that door,” one could suddenly hear the General shout.

Thus, the recording of the conversation was interrupted, as friends and foes prepared for another act in the drama of Isaac and Ishmael.