The Banality of Obliteration – or, Coffee at Chlodna Street 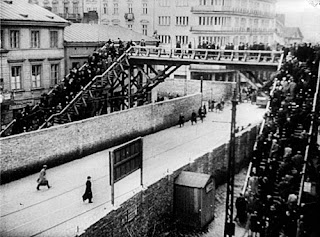 I recently received a letter from an American acquaintance, perhaps I even dare say, a friend. He is a very good person, having devoted his life to care for the sick and poor, alleviating the suffering of many. Most of us would pride ourselves for a humanistic outlook on life such as his.

My friend inquires about the Middle East, and wonders, for instance, “what would happen if the United States took an isolationist's stance in the world?” And, interspersed among his questions, he asks me, “what do you think would happen in the Middle East if Israel was suddenly not there at all? Would the world be more or less stable? Would the Arab countries be able to unify and work together despite years of tribal, religious and political strife?”

The road to hell is paved with good intentions, and the road to paradise on earth is paved with much evil.
I am convinced that the most wonderful condition of peace, safety and tranquility would ensue, just as stated in the PLO (Palestine Liberation Organization, chaired by Mahmoud Abbas) Charter:
“The elimination of Zionism in Palestine,” i.e., the destruction of Israel, which is the declared aim (article 15), “will provide the Holy Land with an atmosphere of safety and tranquility, which in turn will safeguard the country’s religious sanctuaries and guarantee freedom of worship and of visit to all, without discrimination of race, color, language, or religion. Accordingly, the people of Palestine look to all spiritual forces in the world for support” (article 16).

In the official Palestinian Authority daily, Judaism is described as a “distorted, corrupted, falsified religion,” “the Jews’ evil nature is drawn from Adam’s first son,” the State of Israel is a “malignant cancerous growth,” consequently, “the conflict between us [i.e., the Arabs] and the Jews is not a conflict between land and borders, but rather a conflict about faith and existence” (from Al-Hayat Al-Jadida, May 13 and June 3, 2011).

It seems that too many “spiritual forces in the world” are now willing to support the ethnic cleansing of the Jews. The ease, with which the elimination of Israel is discussed, so that possibly the world would become more stable, and so that peace and tranquility shall prevail, should ring the bells of alarm.

This is my intention with the novella Requiem: A Tale of Exile and Return

. I don’t predict Israel’s destruction, but I want to call the attention to these very trends, which do endanger our existence, perhaps no less than Ahmadinejad does. As long as “the spiritual forces in the world” welcome Ahmadinejad, who calls for wiping Israel off the map, at the United Nations, and don’t demand that the Palestinian Authority withdraw those articles in the PLO Charter that call for Israel’s destruction (and which appear on their page at the United Nations’ website), they collaborate in the possible ethnic cleansing of the Jews.

There are quasi-fascist elements in the present Israeli government, increasingly gaining influence, trying to enforce laws that endanger democracy. Netanyahu has chosen his government and coalition (he had different choices), and therefore carries responsibility. This endangers Israel from within, no less than all those who too easily play with Israel’s existence (besides this government’s lack of initiative toward peace and negotiations). There are intolerable fascist calls that can be heard from some of Israel’s extreme right-wing corners for transfer of the Arabs, i.e., ethnic cleansing of the Palestinians. It would, likewise, be horrendous toying with the fantasy of the elimination of Jordan, or Finland, or any other nation, country or people.
But it is, as well, horrendous to believe the world would be better without the Jewish State of Israel, and play with that fantasy.
And it so happened that I received this letter, in which I am invited to contemplate Israel’s (i.e., my own) elimination, on my last day in Warsaw. I had just finished a seminar with a wonderful group of Polish Jungian therapists, which for me was a very special and meaningful experience. I had spent many hours of that last day wandering the extinct ghetto. I traced the process of its existence, from establishment till extermination. I superimposed the well-known pictures from the ghetto, and the process of events from inception, when people were shoveled in behind the walls, to Umschlagplatz, when the Jews were shoveled out for transportation, onto the streets of today. It meant reaching out toward the nearly unbearable, for instance tracing the location of the woman lying in the street, starved to death, in front of the entrance to 10 Walicow Street, photographed from within the doorway.
And that bridge, yes, the bridge that connects the two parts of the ghetto, across Chlodna Street, where life was as normal as it could be in Nazi-occupied Poland. I sat down to have coffee in the only remaining building at the crossroads, looking at the people who had crossed that bridge which is no more, and nor are they. There, I read Naomi Lowinsky’s outstanding book Adagio & Lamentation, in which she, with so much wisdom and thoughtful feeling, extracts the memories that too easily may be buried under the dust of denial.
The maps of 1940-3 and the present merge. The slow movement of a quickly passing day dissolve and blend with those fateful and horrendous hours and years. Hitler had done his best, not the least in Warsaw and in Poland, but did not succeed well enough (though he came pretty close), so we are still here to make much trouble for the world (by our mere existence), which otherwise might be such a wonderfully stable and peaceful world – just like having coffee at Chlodna Street, without a trace of the bridge.
Posted by Erel Shalit at Tuesday, July 12, 2011

What a powerful statement! The demonization of Israel awakens the fears that those of us who lost family in the Shoah never quite get over. How difficult it is to hold the opposites - to see the evils of occupation and still see the necessity of a Jewish state. To read the terrible statement of the Palestinian authority and still accept the need for justice for Palestinians, and a state of their own. But the demand is the demand for moral authority, and I appreciate, always, the moral authority you represent.