Excerpts from Jerusalem: Human Ground, Archetypal Spirit, a chapter by Erel Shalit in Tom Singer's (Ed.) Psyche and the City: A Soul's Guide to the Modern Metropolis (pp. 279-298):

Unlike Rome, not all roads lead to Jerusalem, and those that do may all too easily lead the visitor astray in a labyrinth of divinity and madness. In the course of history, when Rome became the center of power, sanctity and glory, Jerusalem sank into spiritual ruin and peripheral oblivion. Thus, even those modern roads that bring you smoothly to the city may force the pilgrim to pass “through thorny hedges…” of his or her mind.
...

“Crouched among its hills,” Jerusalem is immersed with mythological, religious, and symbolic significance. Yet, scarce in natural resources, the surrounding land is cultivated rather than fertile by nature, and the so-called Jerusalem stone, the pale limestone that characterizes many of the city houses, nearly cracks and shatters by carrying the burden of Heavenly Jerusalem. In its often shabby garb, terrestrial Jerusalem seems to want to shake off its Celestial Glory, releasing itself from the task of being “the gateway to heaven.” At other times, when the light from above is reflected in her harsh stones, Jerusalem seems to embrace the presence of the Shekhinah, the earthly dwelling of the divine. Especially at dawn and at dusk, the reflection of the light may bring that which is below and that which is above, earth and heaven, reality and imagination into play with each other–marble-like clouds weighing heavily above, and stones that radiate light.
...

Poets have wandered the streets of Jerusalem, sung her praise and given her names. They have felt both the beating of her heart and the bleeding of her soul ... Drunk on her spirit, the poet’s soul has been filled both with blissful light and the dark pain of Jerusalem: “Jerusalem stone is the only stone that can feel pain. It has a network of nerves.” Thus, the poets have called her names such as early evening purple and awesome beauty, a wall of dreams and well of salvation, the sealed book and a bird of stone, holy fire, city and mother (metro-polis), den of jackals and cup of ruins.
...

The author Nikolai Gogol, having burned the two first versions of Dead Souls, believed a pilgrimage to Jerusalem would redeem his soul and relieve him from depression and writer’s block. He was shocked by the noise and confusion in the Basilica of the Holy Sepulchre, discouraged by the scenery and the environs. “Not only were my prayers unable to rise up to heaven, I could not even tear them loose from my breast,” he wrote in despair to Tolstoy.

When Herman Melville visited Jerusalem a decade later in 1857, his harsh impression was of “stones to right and stones to left...stony tombs; stony hills & stony hearts.” He noticed dryly that there was “Too little to see and too much dust.”
...

Within the constricted geographical area of Jerusalem we have three mighty images of ascent, transition and transformation, wherein the footprints on the stony ground, the petroglyphs, are transformed into sacred imprints, the hieroglyphs of spirit and creed. The archetypal weight of three theistic Gods may be too much for an area the size of less than one square kilometer, one third of a square mile; again and again Heavenly Harmony turns into Earthly Strife. 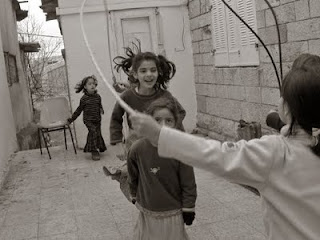 Forthcoming September 21, 2011
The Cycle of Life: Themes and Tales of the Journey