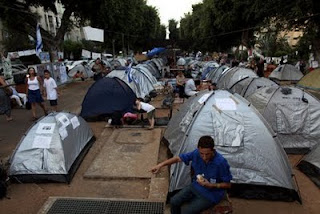 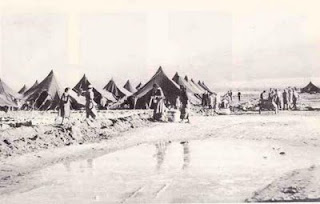 During the last several weeks, in summer’s heat, Israel has seen unprecedented social protest, mainly by the country’s hard-working, mainstream young people.
Israel is not unfamiliar with protests and demonstrations – whether the center-left in support of peace, or the ultra-Orthodox protesting, for instance, the opening of shopping malls on the Sabbath or against building on sites of ancient bones, and workers’ strikes.
However, for a very long time, the hard-working middle-class has carried the burden, working ever harder to cope with rising costs of living, higher rents, receiving less and less for the heavy taxes paid.
This summer has also witnessed an extended physicians’ strike – the excellent doctors are underpaid and overworked and ask for more positions.

The wave of uprisings utilizing social networks such as Facebook and Twitter may have begun after the 2009 presidential elections in Iran, though brutally crushed by the regime, which quickly utilized the internet and the social networks to gather intelligence and send distorted messages.
The Arab Spring continues to unfold, but in the Fall of leaves it remains unclear what dress it will eventually wear. Yet, a process has started, which, it seems, will in the long run inevitably lead to greater openness and democracy, even in Syria – and Iran.

The uprisings have taken different shape in different places, such as Spain, Greece and Britain. In Israel, the young have set up tent-cities around the country, reminiscent of the early days when hundreds of thousands of refugees were hastily absorbed in ma’abarot, transition camps. The gatherings of hundreds of thousands, in Tel Aviv and Jerusalem, in the Galilee in the north and the desert in the south, have been the most peaceful of manifestations, guided by a spirit of determination and creativity, renewal and solidarity.

Israel has always been a country asking much of its citizens. When it seemed that all, or nearly all carried the burden, and there was little for everyone, and distribution was somewhat equal and those in need would get what was required, even if the bread was simple, people could take it.

Besides global phenomena of change and instability, fragmentation as well as bringing people together, in new and ever-changing ways, Israel deals with its own particular problems of privatization and occupation.

Privatization
While PM Netanyahu is particularly identified with the Chicago School and a neoclassical policy of economics, extensive privatization has been the trademark of Israeli governments for the last twenty years.
Israel was a strongly collectivized society, with the kibbutz as a most prominent phenomenon. Ideologically, but no less pragmatically, the collective was necessary in the early days. The country was sparsely populated, and Mother Earth was harsh. It was impossible to revive her alone. The Homeland (and today, the main issue is – Home) was built on solidarity, carrying the yoke together. However, as the country developed, a natural need to separate from the very close proximity between individual and collective was a healthy and inevitable process, beginning in the 1970s.
However, its soul-less and inconsiderate manifestation as financial privatization of public resources led to what President Shime’on Peres (who is 88 today!) said, allegorically, years ago – a country of six thousand millionaires and six million beggars.
The present calls for social justice will have a tremendous effect in this enantiodromic process (whereby phenomena swing into their opposites), in which the extreme favorization of a few turns into greater equality for the many.

Occupation
The second process is ideological and political. Enormous sums of money, raised by tax money, have been invested in the housing of settlers. It can be expected that 80% of the settlements will be dismantled. These settlements constitute an obstruction to peace (which in no way exempts the Palestinians from their responsibility – dismantling all Gaza settlements and some in northern Samaria, and bringing the settlers back into Israel, did not lead to neighborly relations, but rather to thousands of rockets fired into Israeli civilian areas).
The majority of Israel’s population, favoring the establishment of a peaceful Palestinian State alongside Israel, opposing the settlement- and occupation-policies, has carried the financial and other burdens of these undertakings (while, at the same time, an increasing amount of ultra-Orthodox young men have been exempted from army service, remaining in religious studies long after they should become part of the productive work force).

While the present manifestations of social uprising will come to their natural end, as summer turns into autumn, and as the focus will turn to other urgent issues, an important process of change has begun.
It will be difficult to justify investments in ephemeral housing projects deep into Palestinian territory, rather than caring for the mainstream population.
While politicians have been looked down at for many years, and the young have turned their back on politics, a renewal of social and political involvement will arise.
New forms of democracy, some based on renewal of old ideas, will emerge. The use of social networks, which can of course also be misused (e.g. when rating becomes more important than truth), may be part of the new democracy.
The dialogue between elected representatives, government, and the people will be more direct.
Just like the government has appointed a committee to look into the situation, the social protesters have established an expert committee, a Committee of Elders, to formulate their demands.


New forms of democracy are being shaped in the tents of hope.