November 9, The Night of Shattered Delusions 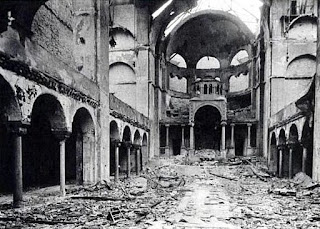 The International Atomic Energy Agency (IAEA) released its report on Iran, November 8, 2011.
Diplomatic sources have described it as "the most damning report ever published by the IAEA and the conclusion arising from it is one: Iran is working to acquire a nuclear weapon."

It expressed particular concern that Iran had carried out computer modeling studies linked to nuclear weapons. "The application of such studies to anything other than a nuclear explosive is unclear to the agency," the IAEA said.

The information also indicated that Iran had built a large explosives vessel in which to conduct hydrodynamic experiments, which are "strong indicators of possible weapon development."
The report undermines those previously produced under the agency's past Director General, Dr. Mohamed El Baradei.
In the past, under the leadership of Mohamed ElBaradei, the IAEA reports created the false impression that the Iranian regime did not develop nuclear weapons.

The night between November 9 and 10, the Night of Shattered Glass, is often viewed as the beginning of the Final Solution.

From Requiem: A Tale of Exile and Return:

… Had not the ordinary German, covering the gamut from willing collaborator to frightened compliant, been infected by years of indoctrination and selective information? “When I myself look into the mirror,” he said to himself, “it is somewhat embarrassing to admit that, perhaps, I may have wished Chamberlain success in his mission of appeasement. I have always had a soft spot for Neville Chamberlain. He pronounced himself to be ‘a man of peace to the depths of my soul,’ and I believed him, and I like to see myself as a man of peace to the depth of my soul.”

With the Nazis five years into power, and aware of the danger that Hitler would drag all of Europe into a terrible war, Chamberlain’s policy of appeasement seemed so sensible for a cultured nation. I can truly understand him, Shimeoni said to himself, when he rhetorically asked why the British should be “trying on gas-masks because of a quarrel in a far away country, Czechoslovakia, between people of whom we know nothing.”

“It sounds at least as civilized as that recent question,” Eli thought, posed not so long ago by French ambassador Bernard, who asked why the world should be in danger of a third World War because of, as he said, “that shitty little country?”

You may not need to be reminded, but September 1938 he signed the pact with Hitler. To bolster the conviction that Europe would be saved by the appeasement agreement, French PM Daladier hailed Goering as “a man one can do politics with.” Why not a nice dinner, as well, and perhaps un cigar, monsieur? October 1, 1938, The Times praised the “Declaration of Peace in Munich,” concluding that the Munich conference “has not only banished the danger of war over the future of Czechoslovakia,” but it “has speeded up a new and a better era in European relationships.” Thank God for The Grace of Times! Upon his return, proud and popular Chamberlain waved the paper he signed with Hitler and declared he had brought “peace with honour. I believe it is peace for our time.”
And Professor Shimeoni, for one, would have made his way to Heston Airport and applauded him upon his return, because he is a man of hope and peace.
Thus, he told himself, “I cannot blame the passively collaborating German, and can only admire and feel a deep love for those who dared to see and those that dared to act.” Particularly he thought of Wickard von Bredow, as the example of exceptional heroism: As County Officer (Landrat), he received the order, November 9, 1938, to burn down the synagogue in the East Prussian town of Shirwindt, just like all the synagogues in Germany that were to be destroyed during the next few hours. Von Bredow put on his German Army uniform, said goodbye to his wife, and, as Martin Gilbert reports, declared: “I am going to the synagogue to prevent one of the greatest crimes in my district.” He knew he risked his life and that he could be sent to a concentration camp, but added, “I have to do this.”
When the SA, SS and Party members arrived to set the synagogue on fire, he stood in front of the synagogue, loaded his revolver in front of the group, showing them that they could only get into the building over the dead body of the Landrat. The synagogue in Shirwindt was the only one in the district not destroyed.
Eli Shimeoni wondered, “Would I have dared to trespass the prohibitions, would I have dared to buy from a Jewish store? I hope so, but the honesty that fears evoke, makes me wonder. If I would have been a 1938 German, may I not have looked the other way, avoiding the shame and the guilt gazing back at me in the store owner’s eyes of shattered glass.” … 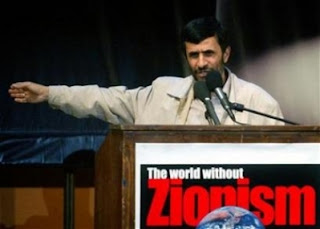 Besides his calls to wipe Israel off the map, the following are some of Ahmadinejad's statements, reflecting the views and intentions of the present regime in Iran:

"The illegitimate Zionist regime is an outcome of the Holocaust... a political and power-seeking network … Today the Zionists dominate many of the world's centers of power, wealth, and media. Unfortunately, they have ensnared many politicians and parties, and they are plundering the wealth and assets of nations in this way, depriving peoples of their freedoms and destroying their cultures and human values by spreading their nexus of corruption."

"... Like a cancer cell that spreads through the body, this regime infects any region. It must be removed from the body."

From Requiem: A Tale of Exile and Return:

It seemed Ahmadinejad was biding his time. Intelligence confirmed that Iran had the bomb, or at least was very close. Having learned from the Israelis, the Iranians enforced a policy of deliberate ambiguity as regards their weapons capacity, maintaining they had already reached nuclear capability for peaceful means. Both Iran and Syria had greatly expanded their stocks of chemical missile warheads. Russia and China warned Israel of severe sanctions if it would attack, and the government had realized that an attack most likely would miss the target(s), and serve as pretext for counter-attacks on all fronts. There was a widespread feeling that the day of the bomb was coming closer.

Tel Aviv, known for its vibrant night-life, now saw hedonistic farewell parties for friends leaving, and parties celebrating “Gog and Magog,” “Doomsday,” and “Who will close the light at the airport?” ...

This slim but incisive novella is a philosophical but completely comprehensible take on contemporary Israel. From a "litany of lamentations" …, the thoughtful narrator Eli Shimeoni recounts his overriding despair - but eventually concludes with hope.
Elegantly and thoughtfully mourning today's saga of Israeli disillusion without hope, bitter alienation, and collapse of Zionist ideals, … but relying on the consistency of past Jewish history and the "triumphalism of hope" the reader reluctantly puts the book down - and smiles! [Edith Sobel]

What Erel Shalit has accomplished in this very brief but intoxicating book is to provide a path for each of us to follow, wisely using the plight of the Jews during the last century as a matrix from which to judge our own individual exile and return. He is an accomplished thinker and he is also a very brilliant writer. [Grady Harp]
Posted by Erel Shalit at Wednesday, November 09, 2011