The Binding of Isaac and the Parting of the Red Sea 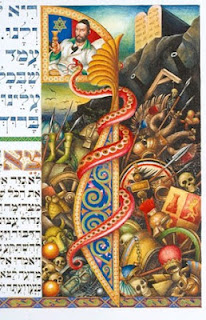 From the Haggadah of Arthur Szyk
The Jewish spring holiday of Pesach, Passover, begins on the 15th day of the month of Nisan, the first month in the Hebrew calendar's festival year, on the night of the full moon after the vernal equinox. This year, the eve of Pesach is celebrated on Friday, April 6.
A legend tells us that at the very moment the children of Israel went into the Red Sea, Mount Moriah began to move from its place, along with the altar for Isaac that had been built upon it. The whole scene had been arranged before the creation of the world. Isaac was bound and placed upon the altar, and Abraham raised his knife.

Far away, at the Red Sea, God said to Moses, “Moses, My children are in distress, the sea is blocking their path and the enemy is pursuing them, and you stand so long praying?” Moses asked God, “What should I be doing?” God said, “Raise your staff!” Moses lifted his staff, the waters of the Red Sea parted, and on Mount Moriah the voice of the angel went forth and said to Abraham, “Do not raise your hand against the boy, or do anything to him” (Gen. 22: 12).
(A midrash from Mekhilta de-Rabbi Ishmael)
The two events, the Parting of the Red Sea and the Binding of Isaac, do here not take place along the timeline of history, but are synchronistically juxtaposed.
In both cases, God tells his earthly representatives to raise the knife or staff:
In the one case, God asks Abraham to reaffirm their covenant by the sacrifice of the son. The actual deed of sacrifice to the gods is then exchanged for its symbolic representation, which is a significant stage in the process of civilization and acculturation.

The following are excerpts from my novella Requiem: A Tale of Exile and Return (Fisher King Press, 2010), which is forthcoming this spring also in Hebrew:

....
Truth was, Shimeoni essentially agreed with Derrida on many points, such as his interpretation of Abraham’s covenant with God of circumcision.
The Divine Father’s archetypal scar inflicted by generations of fathers of the flesh on generations of consent-less Jewish boys seemed to Professor Shimeoni, as indeed to Derrida, to be a repetition-compulsion, rather than the profound internalization of memory.

…
Truly, he repeated to himself, the binding of Isaac signifies this striking cultural transition from literalness to symbolic representation.
God told Abraham there is no need for complete sacrifice, only a sacrifice of the complete (shalem), in order to be seen (yireh), to be recognized, to be named, to become completely human. He will suffice with sacrifice-by-proxy.

But war is the destruction of representation and civilization, said Eli to himself, thereby arguing with Heraclitus that War is the Father of All. The tragedies on the battlefield are all too real and irreversible, and the essence of trauma of battle and war and Holocaust, is the loss of the representative symbol – all that remains is the hellish repetition of trauma.
Nothing represents the loss of symbolization better than the survivor from hell who holds on to a dry slice of bread. In hell, there are no mirrors and no images, no images in the mirror, only the bare walls of suffocation. In the cruel reality of war, the knife is raised and the angels circle above, repeatedly descending, attempting to divert the hand that holds the knife from descending upon the son, until the angels have all gone, and the son is no longer bound but sacrificed, the knife ripping out the soul of life and Isaac laughs no more.