Lakes of Memory and Burning Nights 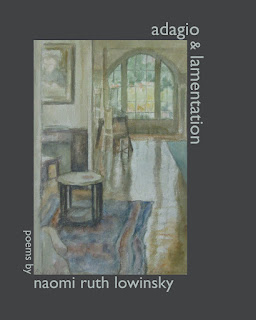 Naomi Ruth Lowinsky was the first child born in the New World to a family of German Jewish refugees from the Shoah. Many in her family were lost in the death camps. It has been the subject and the gift of her poetry and prose-to write herself out of the terror, into life. Naomi had a special tie with her only surviving grandparent, the painter Emma Hoffman, whom she called "Oma." Oma showed her that making art can be a way to transmute grief, a way to bear the unbearable. The cover of adagio and lamentation is a watercolor by Emma Hoffman-an interior view of the Berkeley home where Naomi visited her often as a teenager. Oma tried her best to make a painter of her, but Naomi was no good at it. Poetry was to be her vehicle. Adagio and Lamentation is Naomi's offering to her ancestors, a handing back in gratitude and love. It is also her way of bringing them news of their legacy-the cycle of life has survived all they suffered-Naomi has been blessed by many grandchildren.

Poet and Jungian analyst Naomi Lowinsky’s journey of adagio & lamentation begins with a desire, a longing, a plea to Grandmother Emma Hoffman, Oma, to stop being dead, so she can talk about the light of morning and the light of late afternoon. Then, perhaps, the poet can grasp the meaning of the difference between the painter’s painted shadows, when she shapes emptiness, and like the creator, “there was light” (2010, 1).

And the journey ends at the threshold of summer’s tremor, when one might hear the sound of distant drums, or a helicopter, the anxiety that echoes deeply in the whisper of the gods in the living oak trees and the god of dreams—“is it a war machine,” or a fire, or memories to be penned (90)?

Even the ghost story poems contain beauty and sensuality; the complexes that are our ghosts may be “breaking into a million fragments,” but may, as well, in the oceanic turmoil and intensity of youth, “cause the trumpet vine on the back fence to flower for the first time” (5–6).

Jung Journal: Culture & Psyche is an international journal published quarterly for the C.G. Jung Institute of San Francisco, one of the oldest institutions dedicated to Jungian studies and analytic training.

Founded in 1979 by John Beebe under the title The San Francisco Jung Institute Library Journal, Jung Journal has evolved from a local journal of book and film reviews to one that attracts readers and contributors from the academy and the arts, in addition to Jungian analyst-scholars.