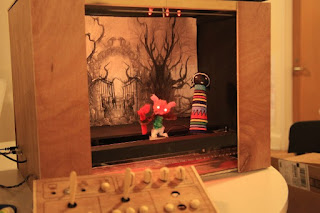 Update:  Make-a-Play has reached the final, which will take place in San Francisco, mid-March!

The Engadget website has announced a competition for the young, creative and innovative. The ten semifinalists have been elected, and now the public is invited to vote for the five finalists.

This is what Terrence O'Brien writes about Gal Sasson's Make a Play, which participates in the competition:

The students at ITP are constantly churning out creative projects that are unafraid to walk the fine line between art and tech. So its no wonder that Gal Sasson's Make a Play wound up as one of the semi-finalists in our Insert Coin: New Challengers competition. It doesn't hurt that the concept also combines two of our greatest loves here at Engadget: toys and Arduino. The name, it turns out, is actually quite descriptive. The microcontroller-driven stage allows anyone to quickly create a piece of miniature theater using handcrafted puppets and an impressive selection of buttons, knobs and switches -- all lovingly handcrafted out of wood on this prototype. The control panel can move the actors using two motorized carts, cue lighting, playback voice recordings and even activate special electronics embedded in the puppets, such as LED eyes in the demo video after the break. Any action can be recorded and fed to a companion computer program, where tweaks can can be made to the automation. Honestly, sounds like the sort of thing we wish we had a as kids.

You can vote here for Gal Sasson's high-tech puppet stage, or another competitor of your choice. Read more about the Engadget Expand Event in San Francisco, March 16, 2013.