Based on your information and informed opinion, you have decided to join the boycott of Israel. Therefore, you have withdrawn your participation in the upcoming President's Conference.

There is much to criticize in regard to Israel, not the least the extensive settlements in occupied areas of the West Bank, in areas that are aimed for Palestine, whether as an independent state or in confederation with Jordan.

I assume that your decision is not only emotionally based, but founded on facts that you have gathered and analyzed, weighed against other events presently taking place in the world. In the past you have certainly proven yourself an independent thinker. Thus, I assume that you have not just succumbed to the pressure which you have been exposed to by the Boycott, Divestments and Sanctions (BDS) movement.

Since I am not aware of any other country that you have decided to boycott, or having expressed your esteemed opinion about, I would like to hear your opinion about the killings of tens of thousands in Syria, the indiscriminate firing of rockets from Palestinian area and by Hezbollah from Lebanon aimed at civilian Israeli territories, as well as your opinion about the anti-Semitic charter of the Hamas and the ethnic cleansing of the Jews that appear in the Palestinian Charter, and Iran’s expressed threat to wipe out Israel.

I would like to hear your opinion about countries, too many to enumerate, that are guilty of discrimination, ethnic cleansing, and human rights violations.

Because if you don’t, then you have singled out Israel, compromising your hitherto known capacity for independent thinking, given in to political pressure, parroting the attitude that the earth is flat, with a black hole in the middle, somewhere along the shores of the Eastern Mediterranean. 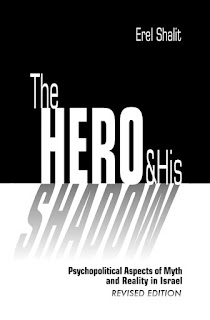 The Hero and His Shadow introduces a psychological perspective on the history, development and myths of modern Israel.

The realization of Zionism relied on the pioneer, who revolted against the Way of the Fathers and sought spiritual redemption through the revival of Mother Earth in the ancient land. Myth and history, psyche and matter are constantly intertwined in the birth and development of Israel, for example when in the Declaration of Independence we are told that pioneers make deserts bloom, the text actually says they make spirits blossom.


Pioneer, guardsman and then warrior were admired hero-ideals. However, in the shadow of the hero and the guiding myths of revolt, redemption, strength and identity-change, there were feelings of despair, doubt, weakness and fear. Where there has been renewal, lurks the threat of annihilation.

The suppressed aspects of past and present myths, which linger in the shadow, are exposed. The psychological consequences of Israel’s wars, from independence to the war of terror, are explored both on a personal note and from a psychoanalytic perspective, with social examples and clinical vignettes.

Shadow aspects of the conflicting guiding myths Peace and Greater Israel are examined. The mythological background of the archetypal struggle between Isaac and Ishmael, and the relationship between Jerusalem and the archetypal images of Wholeness and Satan are looked into.

The Hero and His Shadow & Requiem flyer
Posted by Erel Shalit at Thursday, May 09, 2013 2 comments: