American Icarus and America on the Couch by Pythia Peay

Pythia Peay is an acclaimed author and Huffington Post and Psychology Today blogger on psychology, spirituality and the American Psyche. 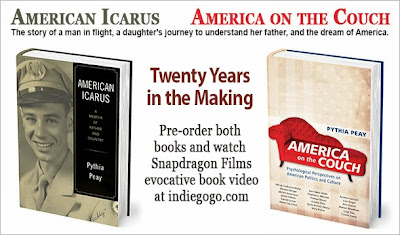 She is the author of forthcoming AMERICAN ICARUS: A MEMOIR OF FATHER AND COUNTRY and AMERICA ON THE COUCH: PSYCHOLOGICAL PERSPECTIVES ON AMERICAN POLITICS AND CULTURE

American Icarus: A Memoir of Father and Country is the psychobiography of my greatest generation father, Joe Carroll – a flier, a farmer, a dreamer, and an incurable alcoholic – and the American myths that shaped his epic life. In search of the father I’d never really known, I interviewed psychologists and historians, and set out to learn about the people and places who made him and the times he lived in: Altoona and the Pennsylvania Railroad, World War II and the Air Transport Command in Brazil, Buenos Aires, the start-up airline El Al in newly independent Israel, TWA and 1950s Missouri and the cultural upheavals that would drive us apart, Mexico and Corpus Christi, Texas.

America on the Couch: Psychological Perspectives on American Politics and Culture is an inspiring and enlightening collection of interviews with some of the world’s leading psychologists on the historical, archetypal and psychological background of such enduring issues as immigration, war and violence, addiction, the presidency, American-Israeli relations, the economy, the environment, and the classic myths of independence and individuality that shaped my restless, sky-faring father and his homeland. Contributors include James Hillman, Marion Woodman, Erel Shalit, Tom Singer, Andrew Samuels, Mary Pipher, Robert Jay Lifton, Judith Jordan, Nancy Furlotti, Harriet Lerner, Ginette Paris, Luigi Zoja and many more.

To pre-order your copies of American Icarus and America on the Couch, please visit the Indiegogo site, where you can view the book video, and a "Gallery" of over forty photos and three excerpts from each book.

Read one of Pythia's classic interviews on the American psyche was with Jungian thinker James Hillman on a "Shift in Ages," and his vision of America's future.
Posted by Erel Shalit at Friday, December 13, 2013