At 12:15 EST on July 22, 2014, the FAA issued a Notice to Airmen (NOTAM) informing U.S. airlines that they are prohibited from flying to or from Israel’s Ben Gurion International Airport for a period of up to 24 hours. The notice was issued in response to a rocket strike which landed approximately one mile from Ben Gurion International Airport on the morning of July 22, 2014. The NOTAM applies only to U.S. operators, and has no authority over foreign airlines operating to or from the airport.

The FAA immediately notified U.S. carriers when the agency learned of the rocket strike and informed them that the agency was finalizing a NOTAM.

The FAA will continue to monitor and evaluate the situation. Updated instructions will be provided to U.S. airlines as soon as conditions permit, but no later than 24 hours from the time the NOTAM went into force.

Gaza and the West Bank need to be demilitarized

The following are excerpted from the novella Requiem: A Tale of Exile and Return. The plot of the book takes place at several levels. While the surface plot paints the picture of concern that is present in the mind of most Israelis, the conclusion reflects the protagonist's confidence and conviction:


Professor Shimeoni tried to organize the order of events, and he jotted down:

For a long time Palestinian President Mahmoud Abbas had threatened to resign, but yielded to American pressure to remain in office. His continuously weakened position, however, was exposed by the humiliating coup carried out by a coalition of Islamic Jihad, Hamas and groups from within his own Fatah movement. Without any resistance, they entered his Muqata compound, pointed their guns and threatened to execute him. After merely an hour or so, a document was signed, and President Abbas was allowed to leave the headquarters of the Palestinian National Authority (PNA) and the West Bank of Jordan for a safer haven. He appeared to be quite relieved from a burden far heavier than what a decent man’s shoulders can bear.

Just like their take-over a few years earlier in Gaza, the Hamas, now as head of “The United Arab Coalition of Islamic Forces in Palestine,” had swiftly taken control of the previously Israel-occupied part of the West Bank, which had been handed over to the PNA. A day after expelling the President, all Government Ministries and most military bases were in the hands of the Hamas. The little resistance that arose had easily been crushed, as many of the president’s loyal forces left with him for Jordan. Having gained experience in Gaza, the Hamas enforced a strong military rule, harsh censorship, and the anti-Israeli messages in mosques and media intensified. During the years of Arafat’s and Abbas’s leadership, Israel’s destruction had been called for on a daily basis in the media and even in the schools. But now the threatening tongues sharpened into swords of heinous hatred; the oft-repeated verses about “the Jews as the scum of evil, the descendents of the apes and the pigs,” were broadcast several times a day, as were the calls for volunteers. Hundreds, if not thousands, signed up for suicide martyr missions and for training camps in Iran. Israeli roadblocks on the West Bank, which according to the Israelis had for such a long time been instrumental in curbing terrorist attacks, while they bore the insignia of humiliation and oppression for the Palestinians, were stormed by tens of thousands of civilians. While some carried weapons, there was no need to fire a single shot. The soldiers were just trampled down, and in most instances the blockades were removed within minutes.

Israel responded by sending troops into the Palestinian territories adjacent to Ben-Gurion International Airport, fearing it would come under missile attack. The European Union sent a message to Israel that its response was “out of proportion.” The French Foreign Minister condemned Israel of committing “a disproportional act of war with negative consequences.”

Suddenly he interrupted his stream of thoughts, and wondered how his words would reverberate in him, were he to listen to his own lecture. Imagining himself in the audience, the remarkable picture of the Sabbath evening service in Bergen Belsen, a few days after liberation, crystallized before his eyes. While the dead and the dying still lie on the ground, the barely living survivors let their voices rise from the ashes into divine Hope, singing Hatikva.

The picture of the survivors from the hell of extinction struck him like lightning and etched itself firmly in his mind. Their voices, singing in unison, streamed through his pulsating veins, his heart beat faster and more strongly. He realized that the course of history changes in a single moment, and with a sense of urgency, he knew he had to raise his voice against denial and demonization, the axis that uncannily linked the One Truth of fundamentalism with the intolerable tolerance of evil. He knew he needed to turn what seemed like predetermined fate into the destiny of vocation. He had to respond to the call of commitment. Consciousness, in contrast to denial, he thought, creates commitment. While the manifestations of consciousness are many, the expression of one’s vocation remains individual.

Requiem is available in English and in Hebrew at Amazon, Barnes&Noble, and at Fisher King Press. 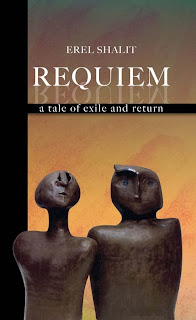 The title of this meditative book, Requiem: A Tale of Exile and Return, seems inappropriate when the reader begins Erel Shalit's story: if these are the thought patterns that are seething through the mind of our narrator Professor Eliezer Shimeoni as he prepares a lecture on the fate of Israel and the fate of the Jews, why then open with a 'Christian' mass for the dead? But then we are reminded that this is yet another work by the author of Enemy, Cripple, & Beggar: Shadows in the Hero's Path, and his life's work is not only a Jungian Pyschoanalyst in Ra'anana, Israel but he is also a man consumed with the great literature and the important writers of the world.

He begins this story simply enough as Professor Shimeoni reflects on the history of the Jews post WW II, the formation of the independent home state of Israel and then the gradual failure of that land to maintain. 'That very moment he understood why the passionate longing for home had anchored in the Jewish soul, and why the sense of the soul's exile wandered like a shadow behind every Jew.' He quotes the words of Chaim Potok 'To be a Jew in this century is to understand fully the possibility of the end of mankind, while at the same time believing with certain faith that we will survive.' Shimeoni has faith that the Jews will survive, given the history of the suffering of the Pogrom. 'His belief was that the Jews thrived at the edge of pathology - their individual pathology, but also their collective pathology as a people.'

Given his theme for investigation Shimeoni examines an imagined end of Israel and then pastes together his responses to that concept with post-modern thinking. 'He recalled the words of Ben-Gurion, that in Israel, in order to be a realist you must believe in miracles. "Was Israel not the miraculous realization and the triumph of the spirit of life, forever hovering over the primordial abyss?" he said in a loud and clear voice, adjusting the microphone. As the lights were turned on, he emerged from the shadow of catatonia, and began his lecture'. This is from the last paragraph of this novel.

But what Erel Shalit has accomplished in this very brief but intoxicating book is to provide a path for each of us to follow, wisely using the plight of the Jews during the last century as a matrix from which to judge our own individual exile and return. He is an accomplished thinker and he is also a very brilliant writer.

Erel Shalit's Requiem: A Tale of Exile and Return touched me deeply, deep into the waters of my soul. From that ocean, I will choose to mention a few of the many emerging waves.