The intractable, seemingly unresolvable conflict between the warring Israelis and Palestinians is, of course, considerably more complex than the split emotions it evokes.

One side sees Israel's occupation of Palestinian territory as the source of all ills, and the other side will point at Palestinian denial of the Jewish state's right to exist as the insurmountable evil.

And sadly, both are right.

Israel's nearly fifty years of occupation of the West Bank (and previously of Gaza as well), however 'enlightened' that occupation may be considered, remains - occupation. Occupation of another people, preventing its independence and possibility of fulfilling its national aspirations, inevitably causes resistance from without, Intifada one and two …, and corruption from within. That is, an expansion of geo-political borders on the ground is accompanied by tighter security boundaries, and a loosening of internal ego-boundaries, such as those pertaining to social and political ethics.

And Palestinian rejection of the Jewish State, seeking its extinction rather than peaceful coexistence, digging tunnels of terror rather than bridges of reconciliation, makes even the most far reaching peace proposal futile, as happened in 2000 and 2006, when Arafat and Abbas rejected the agreements proposed by Barak and Olmert respectively.

When, all too rarely, there is progress in peace talks, it is counterbalanced by terror, and by settlement expansion. Likewise, stalemate between the sides is counter weighed by explosive undercurrents that await eruption.

I believe the two parallel wars – Israel’s war of occupation, and the Palestinians’ war to destroy Israel - need to be recognized, separated from each other, and dealt with differently. And the world community, which too easily gets excited when the gladiators tear each other asunder, needs to help carry the complexity, rather than take sides with either of the warring opponents, thus reinforcing the split-mindedness of the conflict.

From an Israeli perspective, I suggest the following steps to deal with the two wars:

1. Ensure security; which already is constantly on Israel’s agenda, and carried out – at a high price - with great efficiency;


3. Separate between civilian and military occupation:

a. Withdrawal from civilian occupation beyond the self-defined temporary border, and beyond the big settlement blocs; i.e., from close to 90% of the West Bank. Relocate the many small and scattered settlements - in which a minority of settlers reside, to inside the security fence, i.e., the self-defined, temporary but distinct border, preferably by offering compensation for voluntary relocation;

4. Withdrawal from occupation, and geo-political arrangements are necessary to set concrete boundaries for each side’s national desires. In addition, both sides would need to do the in-depth psychological work on a collective basis regarding identity and collective fantasies. On the Israeli side it would entail, among other issues, surrendering a sense of ‘historical rights’ to realpolitik, and on the Palestinian side, issues such as transforming an identity of victimhood into self-reliance. In Israel, only a minority of the electorate – as opposed to a majority of the elected, still adhere and demand Greater Israel. The Palestinians, as well, will have to mourn giving up the fantasy of Greater Palestine, replacing Israel. The process of even minimal Israeli withdrawal from occupied territory must be accompanied by cessation of the horrendous incitement in Palestinian media, schools and mosques.

5. In the long run, in order to ensure viability, low-level yet confederative frameworks of cooperation, can be conducive, such as Gaza-Israel-West Bank/Palestinian Authority-Jordan. At some level, cooperative arrangements are already in place. 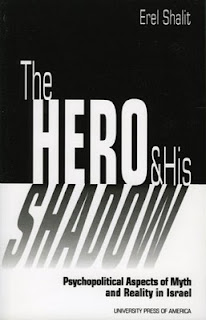 Psychiatrist Carl Jung wrote in The Red Book of the distinction between “The Spirit of the Times” and “The Spirit of the Depths”. We see this vividly demonstrated when we put Ari Shavit’s acclaimed new book My Promised Land: The Triumph and Tragedy of Israel alongside Erel Shalit’s classic work, The Hero and His Shadow: Psychopolitical Aspects of Myth and Reality in Israel. The former takes us through the history of the heroic creation of Israel, including the darkest “shadow” behaviors of the Jewish state in the 1948 massacre of the Arabs of Lydda.

In the latter work, Erel Shalit tells us why.

Kibbutz Shefayim, April 24-26, 2015,
Conference Website Trailer  FaceBook
And in between, there was music.
The following piece is from the delightful performance by the Kibbutz Choir

Thanks to Hugh Milstein for the video!

Pythia Peay: America on the Couch 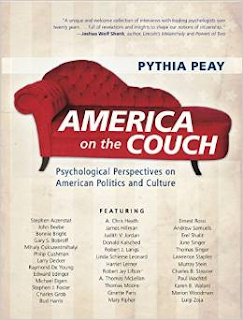 Pythia Peay has written an exceptional book, combining her own deep insights, with those of a wealth of psychoanalysts.

From the back matter:
What lies behind America s historic romance with the gun? Why does it have such a troubled relationship with alcohol and drugs? Why is it so wedded to consumerism and so resistant to the evidence of climate change? What are its enduring myths about individuality, freedom, and independence, and how might we re-imagine our vision of the United States as the Promised Land and The City on the Hill to reflect a multiculturalism that offers the last, best hope for the world? 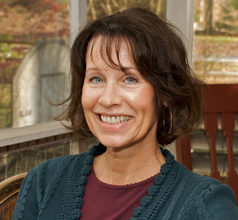 In a two-decades long journey through the American psyche, depth journalist Pythia Peay has asked these and many more questions of no fewer than thirty-six of the world s leading psychologists and psychoanalysts. From Robert Jay Lifton to Marion Woodman, A. Thomas McLellan to Judith V. Jordan, Mihaly Csikszentmihalyi to June Singer, and James Hillman to Mary Pipher, the thinkers in America on the Couch discuss violence, addiction, the environment, capitalism and consumerism, politics and power, and the soul of America. The result is a uniquely comprehensive, wide-ranging, and compelling kaleidoscope of insights into the psychodynamics of a hegemon in peace and at war, as it confronts the shadows of the American century and charts its way into an uncertain, multi-polar future.

In her introduction, Pythia Peay writes:


"The six parts of America on the Couch offer a wealth of perspectives on those symptomatic areas of life in this country where we are faced with continually recurring problems - but also where we may break through to new understandings."

Having been invited, as an Israeli, to share my views, looking across the oceans from the Levant, America's shadows might be undeniable - but so is its light. And the light that emanates from the conscious scrutiny of one's shadow, is admirable. Every society has its shadow; the decisive difference is if it is projected, or if society is open enough to dialogue with its cultural complexes.