Netanyahu exposed as the neo-fascist leader he is 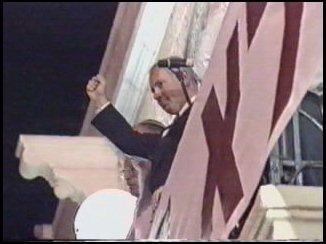 For quite some time we know and have seen how Netanyahu’s extreme right-wing leanings have guided him through years of destructive leadership. But even opposition leader Itzhak Herzog was willing, perhaps for political as well as personal reasons, to give Netanyahu a last chance to turn the tide of history.

Herzog’s attempt to join the government was probably as naïve as it was desperate. And Netanyahu played a simple and clever political trick, now ending up with the feral Avigdor Lieberman as his Minister of Defense, nailing down what is the most extreme right-wing government in Israel’s history.

Netanyahu, who prior to the assassination of Yitzhak Rabin marched behind a symbolic coffin of the PM-to-be-murdered, and who carries the moral if not the criminal guilt of instigation, has now finally accomplished the political goal of a neo-fascist government –based on an authoritarian rather than a democratic state of mind, narrowly ultra-nationalistic and on the path to destroy the institutions that keep the vulnerable democratic balance of society intact. This includes the legal system, as well as the military, who, not surprisingly to most democratic-minded Israelis but perhaps surprisingly to outsiders, is a bastion of broadminded, ethical and civilized leadership.

Much of Israeli society is surprisingly healthy. But pathology is nearly always stronger than health. And so, particularly under the extremist leadership of the master-trickster Netanyahu, the extremist groups among the most fanatical settlers, have received an informal position of instrumental leadership, due to the consent of the political leadership. Those are the state-threatening extremists that the Deputy Chief of the General Staff bravely spoke about on Holocaust Remembrance Day. And it is NOT this brave soldier’s pointing the finger at the problem that serves Israel’s enemies, but the horrors of those extremists that Netanyahu is unwilling to reign in.

Rather than reigning in the extremists, such as the so-called hilltop youth, the neo-fascist government of Netanyahu wants to reign in the voices of sanity.

But there are many voices of sanity in Israel. Even though Herzog has grossly failed as leader of opposition, many of his thoughts are right. Thus, for instance, the Palestinian have several times rejected the possibility of statehood, a state in peace with and alongside Israel, falling victim to their own desire of ethnic cleansing of the Jewish population and replacing Israel with an Arab state. Thus new ideas and solutions, including disengagement from civilian occupation, must be raised.

This is the hour where the voice of sanity must be raised not only by the general public, not merely by the opposition (even in its hour of crisis), but even by those who have kept their sanity and democratic state of mind within the coalition. Right-wing Likud MK Benny Begin has already done so, calling the idea to appoint Lieberman Minister of Defense ‘bizarre.’ The time has come for deposed Minister of Defense Ya’alon, as well as the center-right party Kulanu to leave the coalition, and expose the neo-fascist right-wing under Netanyahu’s leadership for what it is – destructive in every way to Israel as a civilized, peace-seeking democracy.

Two of my books relate particularly to the psycho-politics of Israel, The Hero and His Shadow, and aspects of the Israeli experience, Requiem: A Tale of Exile and Return (also in Hebrew). All of my books (including in Hebrew) can be purchased at Amazon, where you also find brief reviews of several of the books. Any interest in my books is a welcome gift to me, and hopefully, a contribution to the reader as well.