C.G. Jung and Erich Neumann: Conflict, Philia, and Finding the Other in Oneself

Steve Zemmelman has written an excellent review of Erich Neumann's recently published book Jacob and Esau: On the collective symbolism of the brother motif.


In his review, "C.G. Jung and Erich Neumann: Conflict, Philia, and Finding the Other in Oneself," he writes:

Jacob and Esau: On the Collective Symbolism of the Brother Motif is a creative and highly psychological interpretation and extrapolation from the biblical story. The review locates the development of this essay within the relationship between Jung and Neumann, as well as Neumann's own development as a German Jew and analytical psychologist. It shows the origins, within his amplifications of the Jacob and Esau story, of many seminal concepts in Neumann's thinking that became his legacy within Jungian theory, including the ego-self axis and the work on integration of the shadow that was to become Depth Psychology and a New Ethic.

Steve Zemmelman, MSW, PhD, is a Jungian analyst and member of the C. G. Jung Institute of San Francisco who practices in San Francisco and Berkeley. He is an associate clinical professor in the Department of Psychiatry at the University of California at San Francisco. He has a passion for the value of exploring the intersection of spirituality and psychology, particularly the Jewish mystical tradition. He is the author of eighteen published papers, including “C. G. Jung and the Jewish Soul” in the Winter 2012 edition of JUNG JOURNAL: CULTURE & PSYCHE and “Containing a Jungian Light: The Books of Erel Shalit,” in the 2015 Eranos edition of Spring Journal. Correspondence:stevezemmelman@comcast.net. 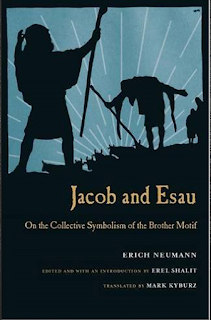