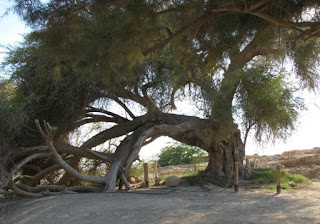 After months of drought, with extreme weather and dry winds, fires have been raging across Israel, beginning November 22, 2016.
More than ten thousand dunam have been burned in 200 fires, with severe damage to forests, animals, villages and towns. A quarter of the population in Haifa, the country’s third largest city, had to be evacuated, and two thousand apartments and houses have been damaged or destroyed.
Human negligence lies behind the first fires, with the extreme weather causing wide damage. Then, Palestinian arsonists, as it seems, may have caused half of the fires, joined on social media by triumphant encouragement, such as the imam of Kuwait's Grand Mosque, Sheikh Mishary Alfasy Rashid, who tweeted “All the best to the fire.”

The tree is sacred, perhaps particularly so in a barren country like Israel, where almost all trees have been planted. Since the beginning of the nineteen hundreds, hundreds of millions of trees have turned the country from swamplands into a land of parks and forests. 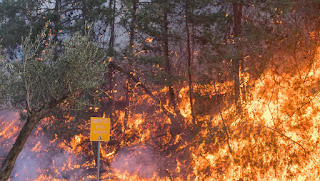 The fires are now being extinguished. Many are the local heroes – fire fighters, voluntary guards at night, police and security forces, people in kibbutzim and in towns, including many Arabs, who have offered their homes for the many who have had to evacuate their own homes.
But an additional phenomenon during these times needs to be mentioned, possibly opening a window to reconciliation, if the political leaders will wisely choose that path: 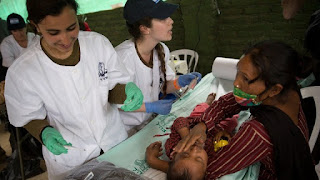 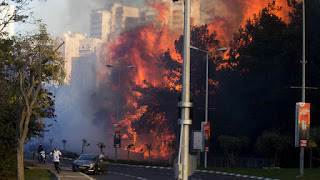 Israel, recognized by the World Health Organization as the world leader in emergency field hospital, sent to disaster areas around the world, has this time had to ask for help.

The first to respond was – the Palestinian National Authority, sending firefighters to help combatting the wildfires. And Egypt, Jordan, Turkey, United States, France, Great Britain, Greece, Cyprus, Italy, Croatia, and Russia are among the countries that have sent planes, equipment and firefighters. 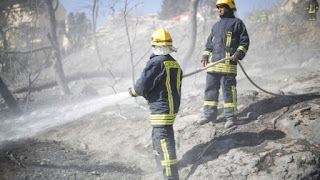 Israel has not been alone in this crisis. When it is over, the Israeli political leadership will have an opportunity to change its policies, to open a window to reconciliation, to invite the Palestinians (who have been equally reluctant) and other neighboring countries, to begin a new chapter, based on mutual recognition, mutual acceptance of responsibility, and willingness to give to each other, rather than take.

As a small gesture, 50% of royalties between November 27 and December 31, 2016, from the two books of mine that pertain to psychological perspectives on Israeli society (regardless of where you purchase them), will be donated to one or more organizations devoted to promote peace and reconciliation, such as joint projects between Israel and Palestine. 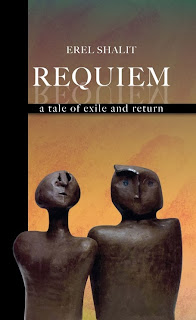 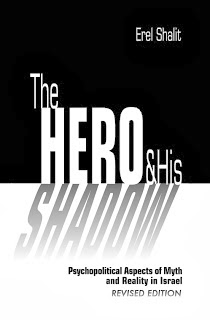 In order to properly understand Israeli society and the sometimes strange responses in certain political circumstances, we need to understand this terrible fear that is hidden within us.”
Prof. Yoram Yovell, author and psychoanalyst.

Requiem
"… Requiem is also a story of the alienation of the Western intellectual Jew from their Jewish religious heritage and the potential for finding a way back to a renewed Judaism and humanism through a new understanding of self and other.  … it is a fight against denial, a battle for consciousness, and the courage to take a stand against evil that define the integrity one can maintain even in a situation that is seemingly hopeless in so many ways.  …"
Dr. Steve Zemmelman, Jungian Psychoanalyst

All my books are available at Amazon.
Posted by Erel Shalit at Saturday, November 26, 2016