No Room for Small Dreams by Shimon Peres 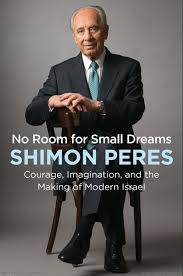 This book is so full of life that it should be read by everyone, especially the young, and the leaders of the region, particularly those on both the Israeli and Palestinian side who find and raise every obstacle possible to avoid what Peres so pertinently calls “the necessity of peace.”

"In 1934 eleven-year-old Shimon Peres  emigrated to the land of Israel from his native Poland, leaving behind an extended family who would later be murdered in the Holocaust."

Toward the end of his memoirs he writes:

"I believe in the inevitability of peace because I understand the necessity of peace. Necessity ... drove the pioneers to settle the land. It pushed them to think creatively - to turn salted dirt into fertile ground, and transform a fallow desert into a community that could bear fruit. ...
I believe with all my being in the virtue of Zionism, and in the historic decision made by Ben-Gurion to accept the UN resolution for a partitioned Palestine. Even then, Ben-Gurion understood that in order to retain the Jewish character of our state, we had to uphold our values, and that our values are fundamentally democratic. Jews are taught that we are all born in the image of God. To believe this fundamental tenet, a Jewish state must embrace democracy, which demands full equality between the Jews and non-Jews. Democracy, after all, is not only the right of every citizen to be equal, but also the equal right of every citizen to be different. The future of the Zionist project depends on our embrace of the two-state solution. 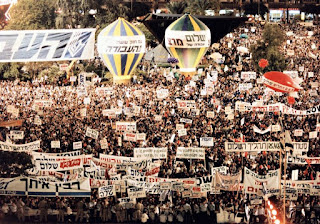 ... To give up on democracy is to abandon our Jewish values. We didn't give up our values even when we were facing furnaces and gas chambers. We lived as Jews and died as Jews and rose again as free Jewish people. We didn't survive merely to be a passing shadow in history, but as a new genesis, a nation intent on tikkun olam, on making the world aright."