Kristallnacht and the Eternal Jew 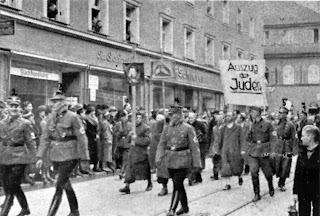 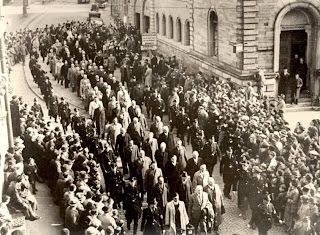 79 years ago, on the night between November 9-10, 1938, pogroms took place during the so called Kristallnacht, in which more than 90 Jews were killed, 30,000 incarcerated in concentration camps, 1,000 synagogues were burned, thousands of Jewish business, schools, homes and buildings damaged and destroyed. 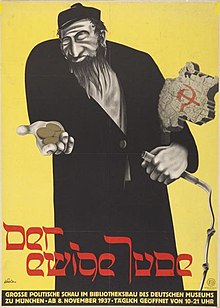 The Eternal Jew exhibition first opened in the Library of the German Museum in Munich on November 8, 1937, and ended on January 31, 1938, thus preceding the Kristalnight by exactly a year.. Billed as a degenerate-art exhibition, it was the largest prewar anti-Semitic exhibit thus far produced by the Nazi's. The exhibit featured photographs pointing out the typically "Jewish" features of political figures, such as Leon Trotsky, and international film star Charlie Chaplin. [who, btw, was not Jeiwsh]

The displays emphasized supposed attempts by Jews to bolshevize Germany, It did this by revealing an 'eastern' Jew - wearing a kaftan, and holding gold coins in one hand and a whip in the other. Under his arm is a map of the world, with the imprint of the hammer and sickle. The exhibition attracted 412,300 visitors, over 5,000 per day.


Read more here, also about the film of that name produced a year later.

The following are excerpts from the novella Requiem: A Tale of Exile and Return:


Eliezer Shimeoni recalled the words of Chaim Potok, who so poignantly gave voice to that collective concern, “To be a Jew in this century is to understand fully the possibility of the end of mankind, while at the same time believing with certain faith that we will survive.” Living in Israel was certainly living at life’s edge, at the edge of survival.

Bitter irony turned into sour cynicism, as Professor Shimeoni reflected on the word “certain.” He was convinced that an eloquent writer such as Potok had purposefully used the ambiguous word certain. “Is there a word more uncertain than certain?” he asked himself rhetorically. “Did Potok mean that we could be sure, could be certain in our faith that we will survive, or did he mean that we may have some, a bit, perhaps a certain bit of faith that we will survive?”

Eliezer Shimeoni did indeed have a certain, a very certain faith that the Jews would survive.
.... 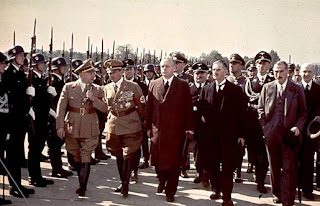 Had not the ordinary German, covering the gamut from willing collaborator to frightened compliant, been infected by years of indoctrination and selective information? “When I myself look into the mirror,” he said to himself, “it is somewhat embarrassing to admit that, perhaps, I may have wished Chamberlain success in his mission of appeasement. I have always had a soft spot for Neville Chamberlain. He pronounced himself to be ‘a man of peace to the depths of my soul,’ and I believed him, and I like to see myself as a man of peace to the depth of my soul.” ...

And Professor Shimeoni, for one, would have made his way to Heston Airport and applauded him upon his return, because he is a man of hope and peace.

Thus, he told himself, “I cannot blame the passively collaborating German, and can only admire and feel a deep love for those who dared to see and those that dared to act.” Particularly he thought of Wickard von Bredow, as the example of exceptional heroism: As County Officer (Landrat), he received the order, November 9, 1938, to burn down the synagogue in the East Prussian town of Shirwindt, just like all the synagogues in Germany that were to be destroyed during the next few hours. Von Bredow put on his German Army uniform, said goodbye to his wife, and, ...

Eli Shimeoni wondered, “Would I have dared to trespass the prohibitions, would I have dared to buy from a Jewish store? I hope so, but the honesty that fears evoke, makes me wonder. If I would have been a 1938 German, may I not have looked the other way, avoiding the shame and the guilt gazing back at me in the store owner’s eyes of shattered glass.” 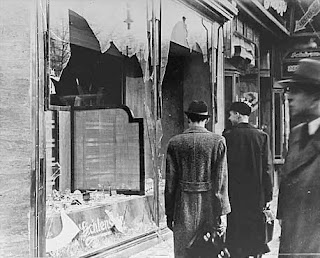 And he knew very well that pathology is always stronger and more powerful than sanity, just like hatred settles into scorched ground, while love forever remains aloft, like letters written in the clouds. Does not Father Death eventually swallow every one of Life’s Children? ...


The following is an excerpt from “My European Animus,” a brief chapter in response to Joerg Rashe’s touching chapter “My Jewish Anima,” in the book he and Tom Singer edited, The Many Souls of Europe:

“Little wonder, then, that to me Jörg represents the best of Europe – its culture and enlightenment, as well as depth, reflection and integrity. But we live lives and worlds apart. The times we live in, the geography in which we dwell, the people and the tradition, the culture and the ancestry into which we are born is our fate, says Neumann. They do shape the contours of our ‘psychography.’ 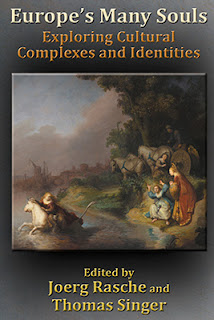 My parents never met in Germany. At thirteen, my mother was thrown out of the illusion of enlightened Mosaic assimilation. The light was turned off, crashing into the black hole of shattered glass at Kristallnacht, walking through the night in the streets of her childhood’s Hamburg. She never really arrived at morning’s light, perhaps because she didn’t meet Dr. Brod. For the rest of her life, she would wait for him, always prepared, dressed up for his arrival.
My father, a broken link in a long chain of rabbis, crossed Nazi-Germany on his way to work on a farm. He was saved by the unknown, righteous officer at the Gestapo HQ, who saved him by that German word, which otherwise evokes such horrendous connotations – herauss, get out! And so I learned that just like evil dwells in all of us, the spark of goodness may be found in evil’s cellar.
My father was a man who set out on his road but never arrived at his destination. Thrown into disarray by the losses, my grandmother turned into the ashes of Auschwitz, his grandmother dying in Theresienstadt’s shadows of deception, he tried to create a life for his offspring. On his way to the kibbutz in the Land of Israel, his wings had lost their wind, and his legs, stifled into clay, remained stuck in the charred earth of Europe.”