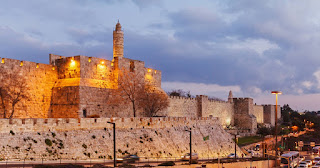 Jerusalem is the capital of Israel, the center of the Jewish people, whether the American President says so or not, and whether the Palestinians accept it or reject it.
Hopefully the Arab part of Jerusalem, what in Arabic is Al-Quds will, one day, also be the capital of a Palestinian State. Not instead of Jewish Jerusalem, but alongside.
The Palestinians and other Arab countries have tried to deny the intimate and historic link between the Jewish people and Jerusalem - rather successfully so for instance at UNESCO.

A one-state solution is not a viable option, only a prescription for never-ending violence.
There are many possible roads toward a two-state solutions even in times characterized by animosity and frustration, though it may not be carried out by the three limping leaders – Trump, corrupt Netanyahu, Abbas who hangs on to power though he was supposed to stand for re-election nearly a decade ago but hangs on to power.

Regarding the boundaries and borders of Jerusalem, one of the most practical suggestions has been presented by the Geneva Initiative: 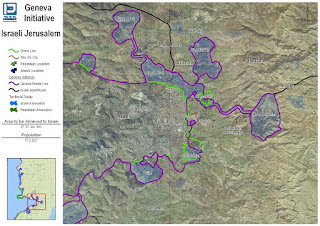 The following is excerpted from the beginning of my chapter on Jerusalem, published in Tom Singer’s (ed.) excellent volume Psyche and the City: A Soul’s Guide to the Modern Metropolis. 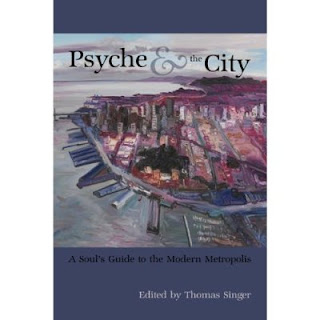 Unlike Rome, not all roads lead to Jerusalem, and those that do may all too easily lead the visitor astray in a labyrinth of divinity and madness. In the course of history, when became the center of power, sanctity and glory, sank into spiritual ruin and peripheral oblivion.[1] Thus, even those modern roads that bring you smoothly to the city may force the pilgrim to pass “through thorny hedges…”[2] of his or her mind.
One may conveniently approach Jerusalem from the west, ascending the modern highway, which climbs eastward through the Judean Hills–like a Western mind moving toward the Orient.[3] By approaching driving on the comfortable asphalt that smoothly covers the ground and softens the bumps, one may arrive only to find a noisy and neglected city, tired by too much spirit and worn out by too much poverty. Slowly winding upward through the hills, parallel to the highway, runs the dusty old donkey path, burdened by archetypal history. Arriving this way, one may find the sparks of illumination that shine from within the dry stones, as well as the strife and conflict that cut through the rocks of .
Alternatively, one may proceed toward on the Route of the Patriarchs, from the desert in the east. This is the path on which the ancient Hebrews arrived, as they crossed the river into the land of Canaan, thus gaining their name and reputation as Hebrews, which means “those that came from across the river.”
One may capture Jerusalem by drawing the sword against evil spells, as did King David from the Jebusites three millennia ago, or enter the city humbly on a donkey, like Jesus did and any future Messiah is supposed to do as well, or like the Caliph Omar majestically riding on a white camel. In whatever way one arrives, the visitor must be ready to overcome the obstacles of Earthly Jerusalem, which far from always mirrors her Heavenly Sister’s image of completeness and redemption.
“Crouched among its hills,”[4] Jerusalem is immersed with mythological, religious, and symbolic significance. Yet, scarce in natural resources, the surrounding land is cultivated rather than fertile by nature, and the so-called Jerusalem stone, the pale limestone that characterizes many of the city houses, nearly cracks and shatters by carrying the burden of Heavenly Jerusalem. In its often shabby garb, terrestrial seems to want to shake off its Celestial Glory, releasing itself from the task of being “the gateway to heaven.”[5] At other times, when the light from above is reflected in her harsh stones, seems to embrace the presence of the Shekhinah, the earthly dwelling of the divine.[6] Especially at dawn and at dusk, the reflection of the light may bring that which is below and that which is above, earth and heaven, reality and imagination into play with each other–marble-like clouds weighing heavily above, and stones that radiate light.
wavers between the spirit that takes her to be God’s joyous garden, the fountain of the awakening love and beauty of the Shulamite, the bride of Wise King Solomon, builder of the ,[7] and her Godforsaken body, poor and neglected, a shameful and condemned whore, as she is described in Ezekiel.[8]

Significant Dates in the History of
Jerusalem dates back to the fourth millennium B.C.E. It became a permanently settled Canaanite city in the nineteenth Century B.C.E, mentioned in the Egyptian Execration Texts as Rushlamem.[9] The Bible first mentions Jerusalem in Genesis 14:18-20, when Melchizedek, “king of Shalem,” greeted and blessed Abram upon his arrival. According to the Biblical narrative, it was a small, fortified Jebusite city for about two centuries until captured and made capital by King David in the tenth century B.C.E., after he had ruled for seven years in Hebron. He brought the Ark of the Covenant, holding the stone tablets with the engraved Ten Commandments, to . The was later placed in the Holy of Holies in the built by his son, King Solomon. The Babylonian King Nebuchadnezzar, who with his one hand built the Hanging Gardens of Babylon, destroyed Jerusalem with his other, and deported much of the population in 586 B.C.E. However, a few decades later King Cyrus the Great allowed the Jews to return and to rebuild the . The Second Temple was completed in 516 B.C.E., and later enlarged by Herod in the first century B.C.E.
The Hellenistic period began with Alexander the Great’s conquest of Jerusalem in 332 B.C.E. Following the Maccabean revolt the Jews recaptured Jerusalem and restored the Temple in 164 B.C.E. However, a century later General Pompey captured the city. The Romans would reign until the beginning of the Byzantine period, .E.
Jesus, born ca. 6/5 B.C.E., towards the end of the great and cruel King Herod’s reign, was crucified at the hill of Golgotha, then outside the ancient walls, probably in .E. The Church of the Holy Sepulchre, inside the present walls surrounding the old city, was built by Emperor Constantine early in the fourth century, likely at the site of crucifixion.
The Second Temple was destroyed, presumably on the same day as the destruction of the first Temple, on the ninth of the Hebrew month Av, late summer .E., which for the observant Jew is a day of fasting and mourning the destruction of Jerusalem. Yet, Talmudic legend raises the idea of transformation, suggesting that the day of destruction signifies the birth of the Messiah. After defeating the revolt of Bar Kokhba in .E., the Roman Emperor Hadrian renamed the destroyed city Aelia Capitolina. He prohibited the Jews from entering the city, and on the ruins of the former temple, he built one to the worship of Jupiter.
The Byzantine period lasted from the beginning of the fourth to the middle of the seventh century, followed by the Muslim period. The al-Aqsa–i.e., “the furthest”–Mosque was built at the Temple Mount during the Umayyad period, early eighth century.
The Crusaders ruled from 1099, barring non-Christians from the city, which then was captured by Saladin in 1187. Following the Mameluk period, Jerusalem and the Holy Land were conquered by the Ottoman Empire in the early sixteenth century. Sultan Suleiman I, alternatively called the Magnificent and the Lawgiver, rebuilt the city walls, which had been razed three centuries earlier.
remained desolate for centuries. The Zurich-born Dominican Friar Felix Fabri, who visited the Holy Land late in the fifteenth century, wrote of Jerusalem’s destroyed buildings, abandoned by its inhabitants. At the same time, Obadiah of Bertinoro, the intellectual leader of the Jewish community in Jerusalem, described the city as poor and largely desolate. While at the end of the period the population of reached 100,000, it had been reduced to less than nine thousand in 1800. Only in the mid-1800s did the city wake up from its slumber, beginning to recover and grow again.

Psyche and the City is available on Amazon and other sellers.

[1] Cf. Martin Goodman, Rome and Jerusalem: The Clash of Ancient Civilizations (New York: Vintage, 2008), for the history of the two cities and the civilizations they represent.
[2]  Zev Vilnay, Legends of Jerusalem (Philadelphia: Jewish Publication Society, 1973), p. 304.
[3] It is by facing the orient, the east where the sun rises, that we find our way, i.e., orientate ourselves.
[4]  Yehuda Amichai, Poems of Jerusalem and Love Poems (New York: Sheep Meadow, 1992), p. 49.
[5]  “And Jacob awoke from his sleep, and he said, Surely the Lord is in this place; and I knew it not. And he was afraid, and said, How awesome is this place! this is no other but the house of God, and this is the gate of heaven” (Genesis 28:17). Rabbinic folklore (midrash) says that while the foot of Jacob’s ladder was in Bet El, the top, which reached the gates of heaven, was in .
[6] “And they shall call Jerusalem the ,” “At that time they shall call Jerusalem the throne of the Lord” (respective translations of Jeremiah 3:17).
[7]  Isaiah 51:3; Song of Songs, e.g. 7:1. The eleventh century Rabbi Ibn Ezra interprets the Shulamite here to represent Jerusalem.
[8] Ezekiel 16.
[9] Menashe Har-El, Golden Jerusalem (Jerusalem: Gefen, 2004), p. 22.
Posted by Erel Shalit at Friday, December 08, 2017